« Bali - The Last Paradise in the World | Main

I arrived in Kuala Lumpur, Malaysia, on Monday, December 17th.

Before arriving, I had booked three nights at the Sunshine Bedz hostel, which was located in the center of the city. But aside from that, I had no plans. I did not know where I wanted to go next, and if I loved the city, I wanted to offer myself the option to stay longer.

Immediately upon leaving the airport, there were multiple ways for me to get to the city center. I opted for the most time and money efficient option, which was to take the high-speed train into the city-center. This took around 45 minutes, and cost $11.00. It actually was a stunning ride, which showed the amount of greenery and mountains that surrounded the city!

My hostel was located only two minutes from the train station, and immediately upon entering it, I felt so much energy and excitement. At check-in, they let me know they had game-night tonight, which basically meant they created two teams, and gave beer to whoever lost, and even more beer to those who won. With that knowledge, I opted to sign myself up.

My room in the hostel was a mixed dorm (meaning it allows both males and females, whereas some are gender specific) for 6 guests. Each night cost me approximately $7.00 (including breakfast). I immediately made friends with a Swedish guy in my room, and we then went out for a quick dinner before the game night began.

In hostels, it is extremely easy to meet people and make new friends. If you are traveling on your own, I highly recommend this!

At the game night, each team consisted of ten players. The questions were fairly easy, and allowed enough time between each question for everyone to get know those who were around them. The game night ended around 11pm, which was when everyone headed to the next bar (nightclub) and danced for a couple of hours.

I ended up heading back to the hostel around 4am and walked home with an Austrian girl. We opted to stop and get food on the way home, and it was amazing to see that the entire city of Kuala Lumpur seemed to have only just started their night. There were people everywhere and all of the street vendors were still open. If you are coming to Asia to party (not the intention of my trip, but I want to include all observations) then Kuala Lumpur was the right place to be.

The next morning, I decided on a whim, that my next destination would be Japan, and I would be leaving in 48 hours to go there to meet up with a friend. After looking at the weather in Japan, I knew I would need a new winter coat for there. So, lucky for me, I seemed to be in the mall capital of the world.

I spent that day exploring malls, and eventually found the perfect coat for the cooler weather I would be going into. During lunch that day, I had a traditional Malaysian Dish of Nasi Lemak. It was a combination of spices and scents, which went really well together. The rice, however, was made with a coconut sauce, which added some sweetness to it.

Picture of my Nasi Lemak is below. 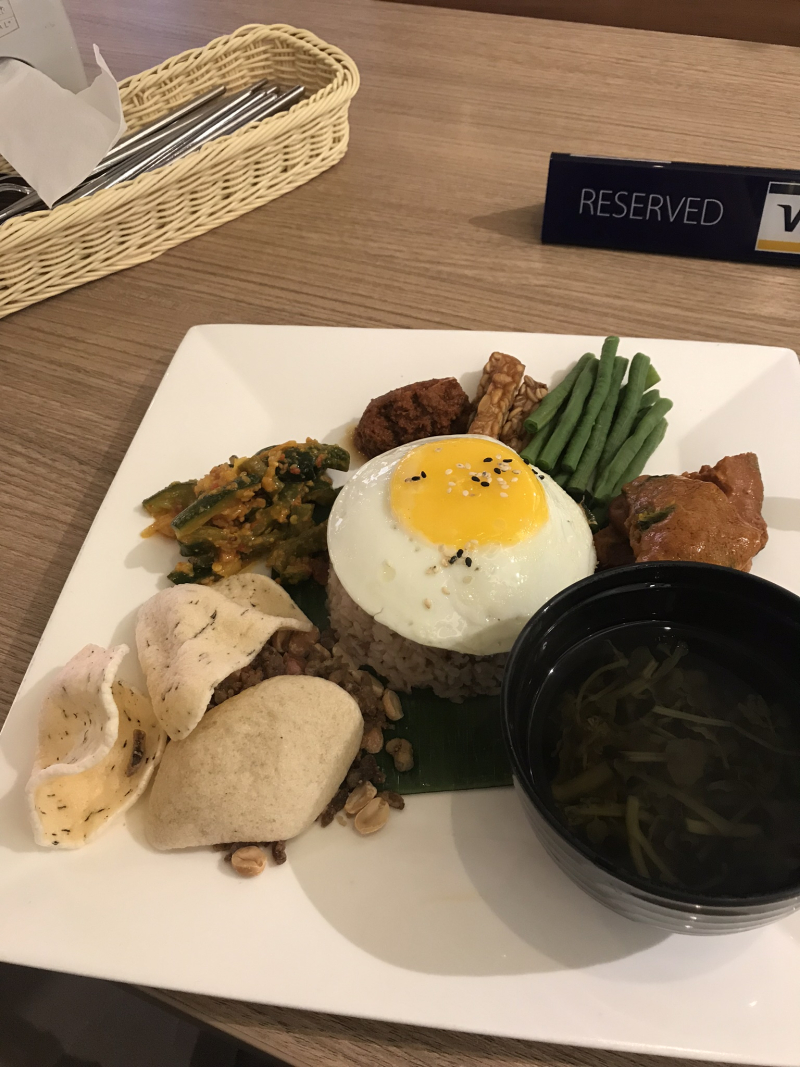 Just from walking around that day, Kuala Lumpur appeared to be a very efficient and high-class city! I think it would be easy to adapt to living here as an expat.

When I got back to the hostel, I went to do some laundry at a local store. When traveling like this, laundry becomes a big consideration and youlearn to plan your outfits accordingly. Almost every day, I have to become more strategic on what to wear.

Clearly I do not do my laundry that often, and I couldn’t stop laughing when I realized I had left my water bottle in the washer along with my clothing. This led to me distracting the store manager, until I could get it out. While this would not harm the machine, I had a feeling if they saw this, I would pay a hefty fine for it.

Back at the hostel, I then met Ellen, from Montreal, who had quit her job to travel (like me) and who would become my new travel-buddy.  We instantly clicked, and spent most of the next two days being inseparable from each other. In fact, it was a huge compliment to us that by the very next day, many people commented on how they thought we had been friends for years, and not two people who had just met.

For dinner that night, a group of us went to find classic Malaysian street food. Ellen and I settled for some noddles and curry, but Stefano, who was from the Netherlands, opted to try frog from a local vendor. He shared that he enjoys trying unique foods everywhere he travels. So, each of us, sampled the frog with him. In truth, and as cliche as it sounds, I found it tasted and had a consistency like chicken.

Picture below shows frog, and a number of other unique options you could have grilled for you. 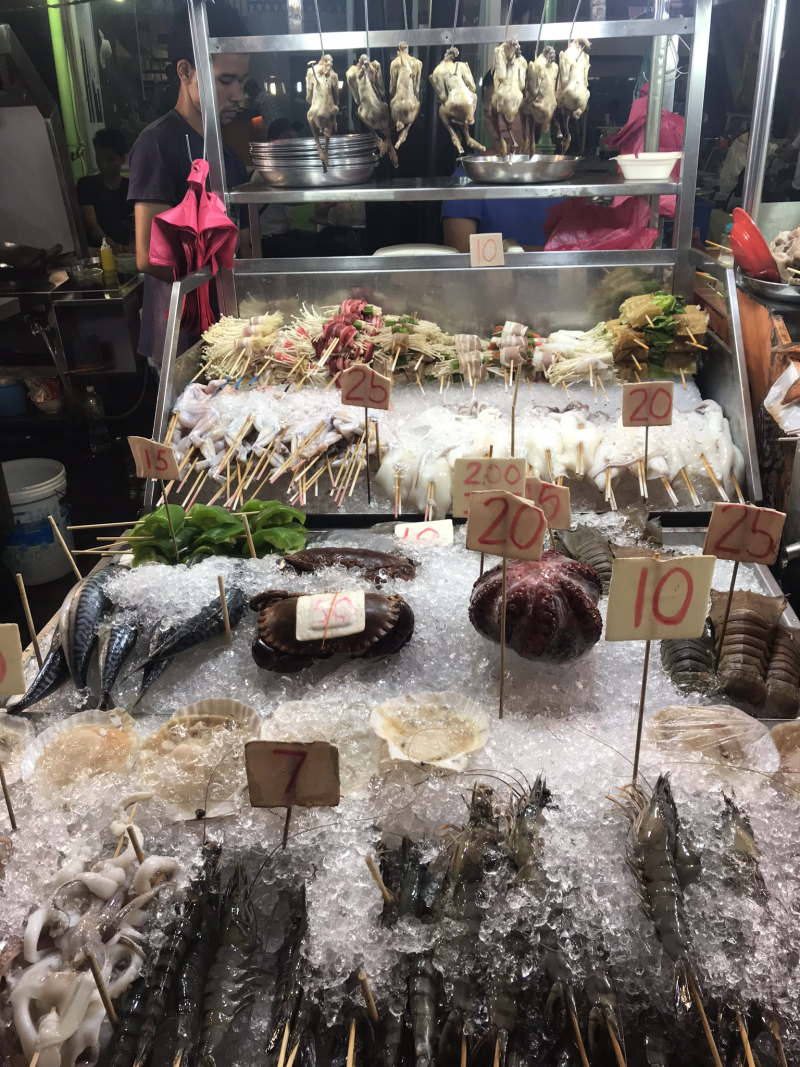 That next morning, Ellen, Stefano and I woke up early and went to the Batu Caves, which are a top sight in Malaysia. These caves are made of Limestone, and said to be approximately 400 million years old!

Outside of the caves, you are greeted by a very impressive entrance that has a large statue of  Lord Murugan, who is a known as the Hindu God of War. In front of you, it  also has a gorgeous rainbow colored steps that house hundreds of monkeys leading up to the top.

The climb up is steep, and turns into a game of dodge the monkeys on your way up. I found it hilarious how some people would bring food with them, and then throw  it to distract the monkeys, while they then would run up.

Picture of the me on the steps leading to the front entrance. 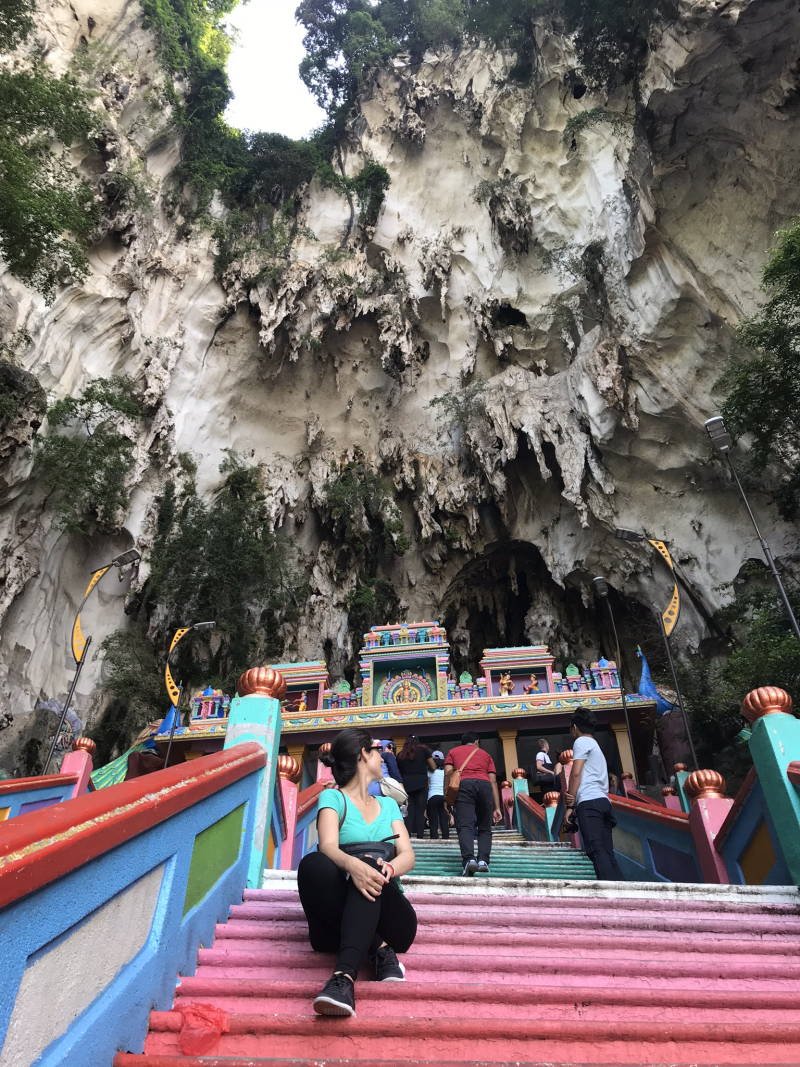 When you get to the top by the caves, it is dark and you are allowed to walk inside. There are some holes inside which allow for random patches of light to shine through, as well. These spots of light create something that looks like it is out of a story book.

Inside the cave, it is cold, and calm. Again, there were hundreds of monkeys. In a way, I kept waiting for King Kong to come roaring into the building with the way the monkeys would randomly run and congregate in almost military fashion. However, witnessing this was certainly something to see, and something to respect!

When you leave the Batu Caves (which are free, by the way), you are given the option to visit the Dark Caves. We did not know much about what the Dave Caves before, but decided to sign up for a tour since we were already here. This was an amazing decision, and ended up being my favorite part of Kuala Lumpur.

In the dark caves, you are given a flashlight and helmet prior to starting your tour.  In this tour, you see bats, the world’s rarest spider (only 150 left in the world), and all sorts of creatures. There were actually also snakes inside, but I did not see them. This made me wonder where they were for the majority of my time!

I found the tour very informative, and would highly recommend it to anyone in Kuala Lumpur.

Photo of me inside the Dark Cave during the Tour. 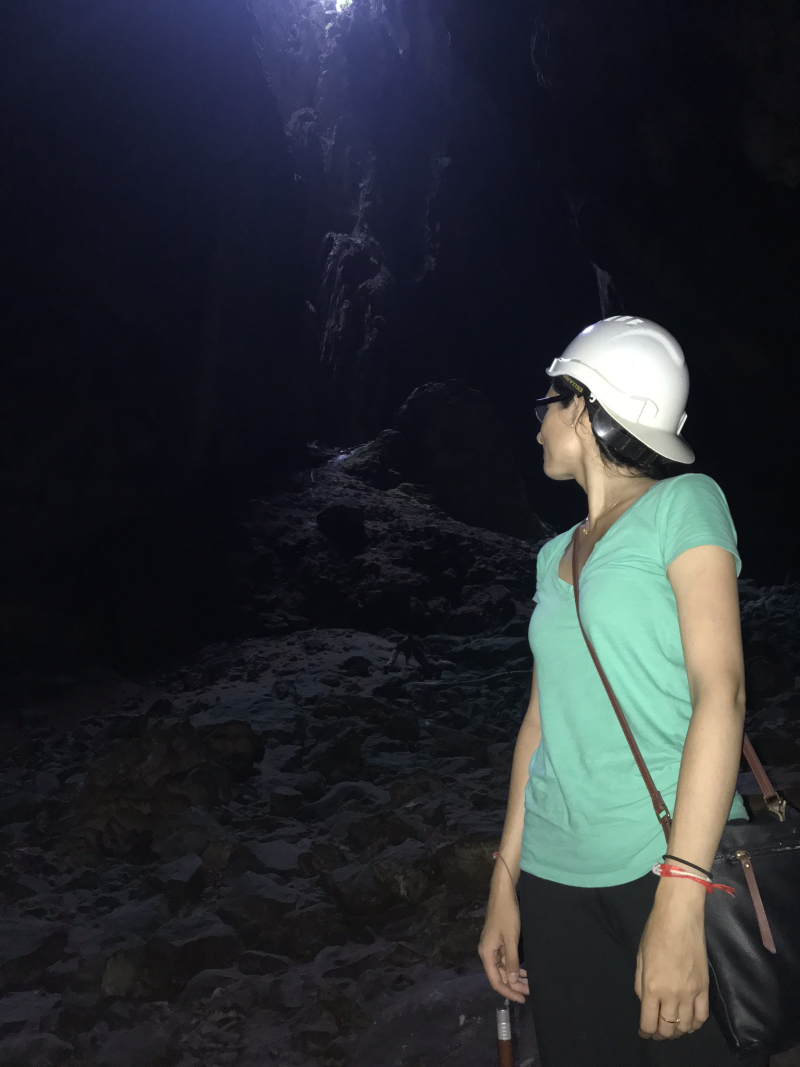 After the caves, we went back to the city center, and sought out fresh fruits to reward ourselves after the climbing we had done that morning. In Asia, this is one of my favorite parts - trying all kinds of new fruits and enjoying how tasteful and cheap they are. We got fresh mango, jackfruit, and kiwi, for about $5.00, which was the perfect way to cool off.

After this, Ellen and I spent the rest of the afternoon walking around Kuala Lumpur, and enjoying the malls and coffee shops along the way. In the first mall we went to, it was six floors of only technology. I had never seen anything like this, it only has computers and televisions inside.

In another mall, there was a Roller Coaster inside! It looked like something you would see inside of Las Vegas.  Walking through the malls easily took up hours of our time and is a good way to avoid the unbearable afternoon heat!

That evening, a group of us went out for dinner at a local Arabic restaurant. Below is a picture of our group during the dinner, which was where I enjoyed the most greasy chicken sandwich with french fries. While traveling, I have learned, indulgence is necessary and very good for your heart! 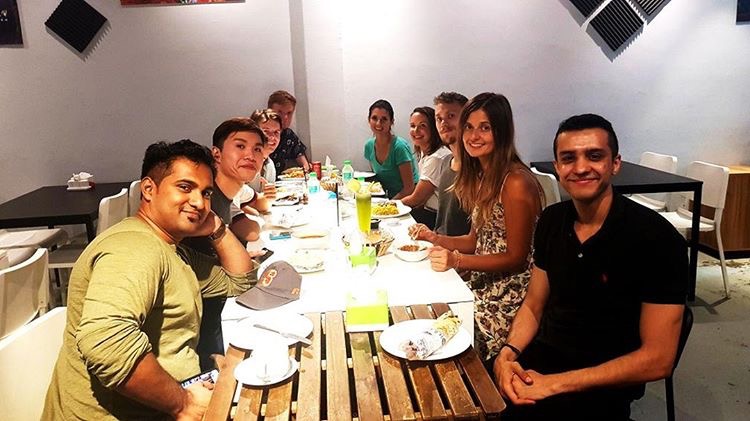 After dinner, a group of us went to go see the Petronas Twin Towers, which is currently the tallest twin towers in the world.

At night, they are extremely impressive and beautiful. Inside the building (what a surprise!) is another mall filled with high-end designers.  The area surrounding the towers is beautiful too, filled with large parks and lakes.  It is a nice area of the city if you like to walk or run. 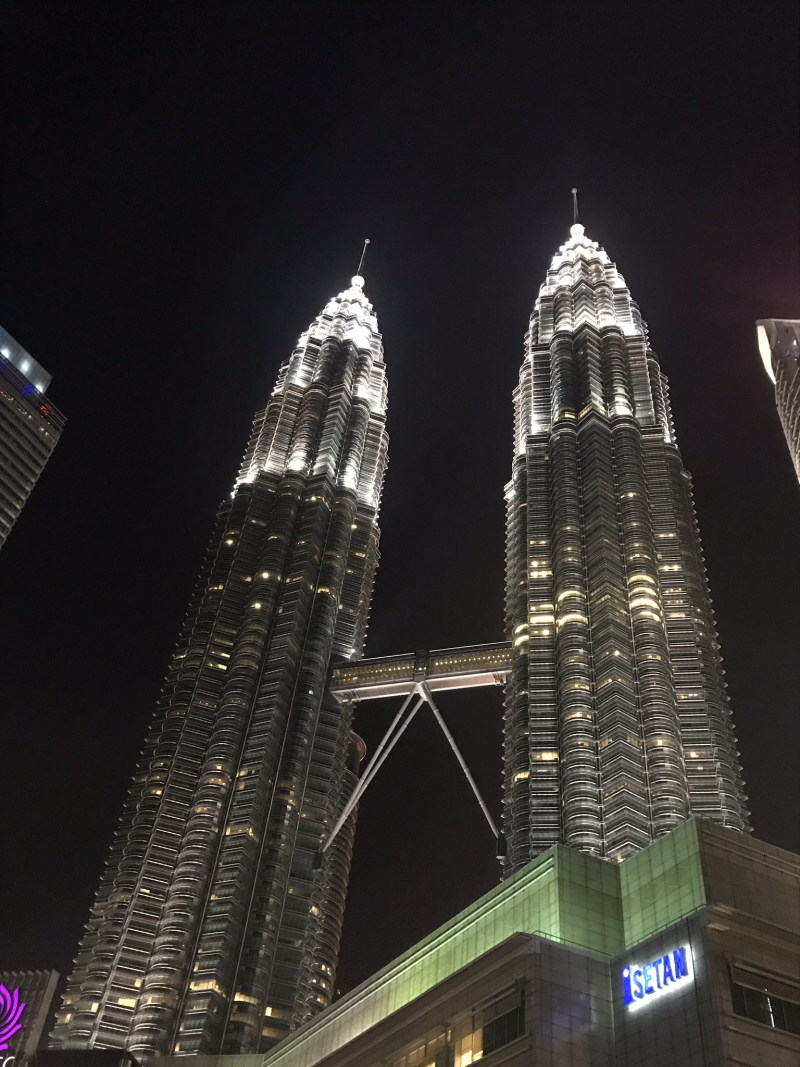 When we finished at the towers, we decided to walk back to our hostel instead of taking a taxi. We attempted to take a “short-cut” and ended up walking over 2 hours, for what should of been maybe 45 minutes. I actually enjoyed this, as it allowed us to see a lot more of the city than I normally would have!

The next morning, a group of us went for breakfast before I left for my flight to Osaka.

For breakfast, we had a paratha with banana, and savory sauces and chiles. This cost me $1.00 and was something I could easily eat every morning without complaint. 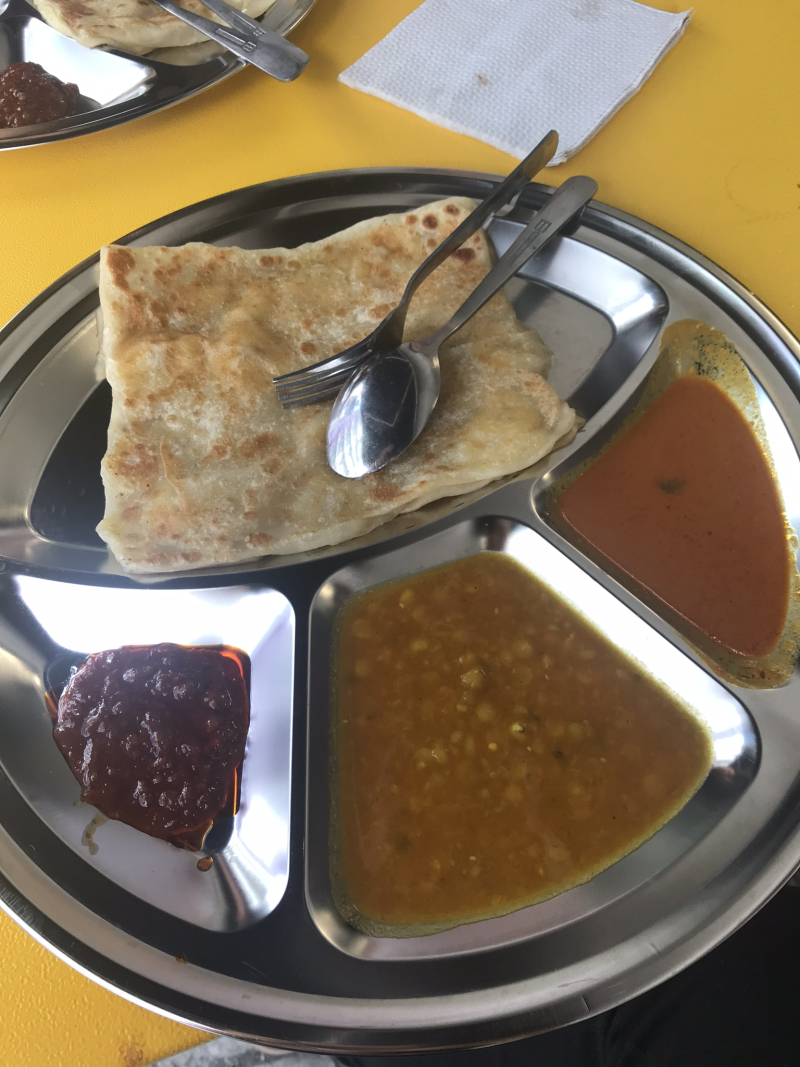 My time in Kuala Lumpur, was short, but sweet (literally). I indulged in so much delicious food, and truly loved every second I spent here. The people that I met in my hostel were wonderful, and the time we shared together is something that I will not forget.

If I have the chance, I would like to come back here and see more of Malaysia. If I had not make the decision to buy the ticket to Japan, I would have been very happy to continue exploring here.