Following our time in Cambodia, on December 4th, my mom and I headed to Yogyakarta, Indonesia.

During the planning for my trip, Bali came out as one of my top destinations. However, Indonesia is a country of more than 17,000 islands, so I knew I wanted to see another part of the country, not just Bali, so I could get a greater sense of the diversity of the culture.

Yogyakarta (pronounced like Joyjakarta) is a city on the island of Java. When I started my research, I could see it was home to many extraordinary temples, and offered the traditional Indonesian culture that I really wanted to immerse myself in!

At the airport, we were picked up by a driver named Jimmy. The drive to our hotel was only about 10 minutes away, but it quickly gave me a glimpse into this beautiful city. There were countless street markets, many laughing children in school uniforms, and stunning mosques.

Jimmy, called himself “our guy” and offered to be our guide for the next day. We accepted, and agreed that our first stop the next morning would be Borobudur Temple, which we wanted to see at sunrise. That meant we would wake up at 2:30am for us to be there for the dawn at 4:30am.

That next morning, when Jimmy was late, and I tried not to let my lack of food (and coffee) get the best of me. The hotel attendant felt bad for us and fed us rice crackers. When Jimmy finally arrived at 3:15am, there was an awful lot of apologizing, but we were just happy to still be able to see the temple that day. I will never know how, but Jimmy ended up getting us to the temple on time for the sunrise (I won’t do the math, but will share that it felt like a scene out of the Fast & Furious)!

Borobudur Temple dates back to the 9th century and is the world’s largest Buddhist Temple. Today, it is also a UNESCO World Heritage Site. This stunning temple is a three-dimensional mandala (diagram of the universe) and a visual representation of Buddhist teachings.

Even at first glance, the temple is magnificent. However, when you begin to climb the steps it is even more beautiful. The area surrounding the temple is rural, and also offers impressive views of the countryside.

Below are some pictures from that morning. 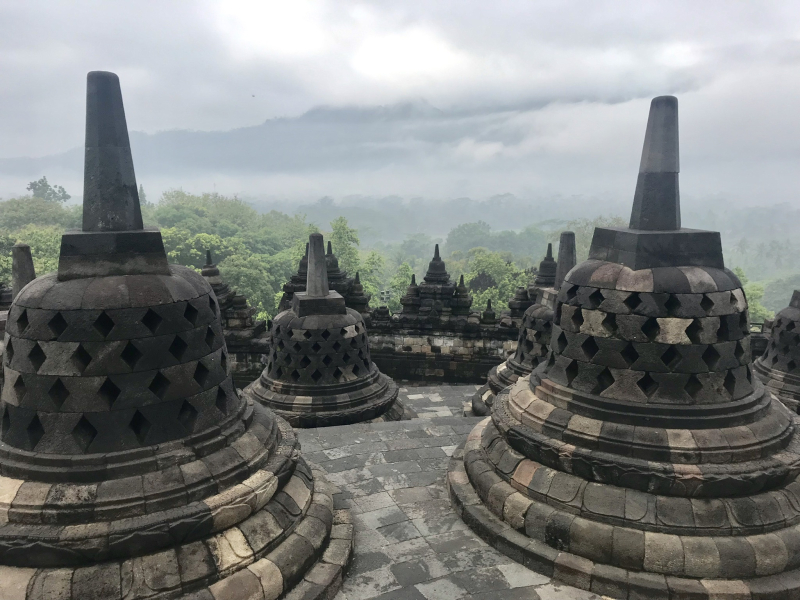 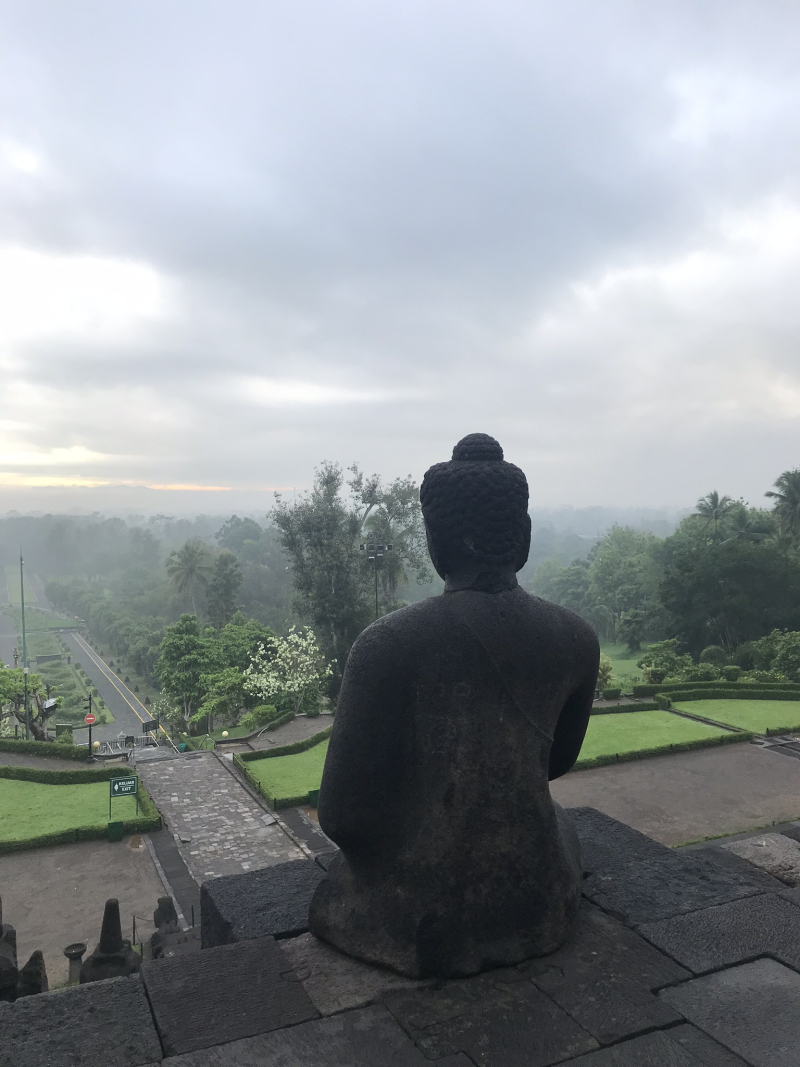 The unique architecture and experience I had at the Borobudur temple is something I will never forget. The site was surprisingly empty, with maybe 20 other tourists there with us. To date, it has been the most amazing temple I have had the chance to visit, and we had been to several in Thailand and Cambodia.

Next we headed off to the Prambanan Temple (as you may have guessed we really enjoy these temples!)

Like Borobudar, Prambanan is extremely impressive, but it would not be fair to compare the two. Prambanan is a Hindu temple that was constructed during the 10th Century to pay tribute to three of the Indian Gods - Shiva, Vishnu, and Brahma.

At first glance, this temple looks very similar to Angkor Wat (in Cambodia) and Ayutthaya (in Thailand). It is extremely large and I feel it has a strong masculine energy to it. 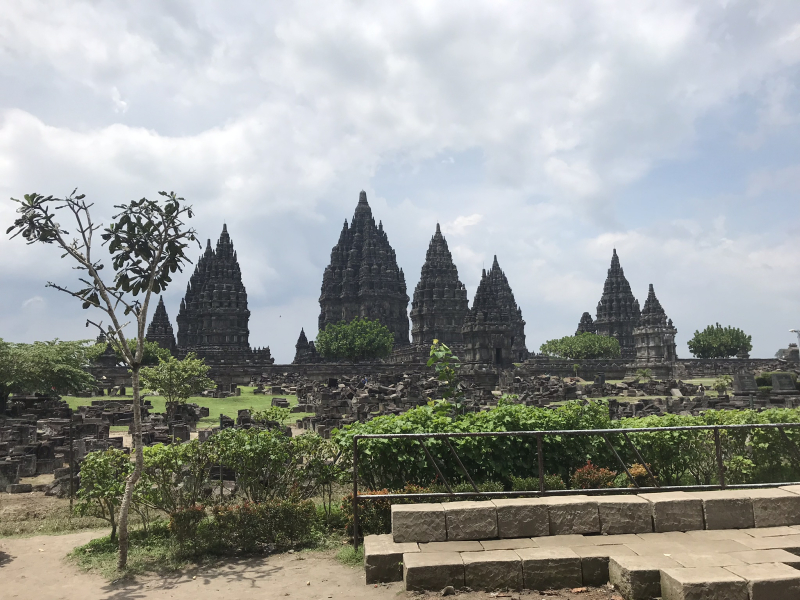 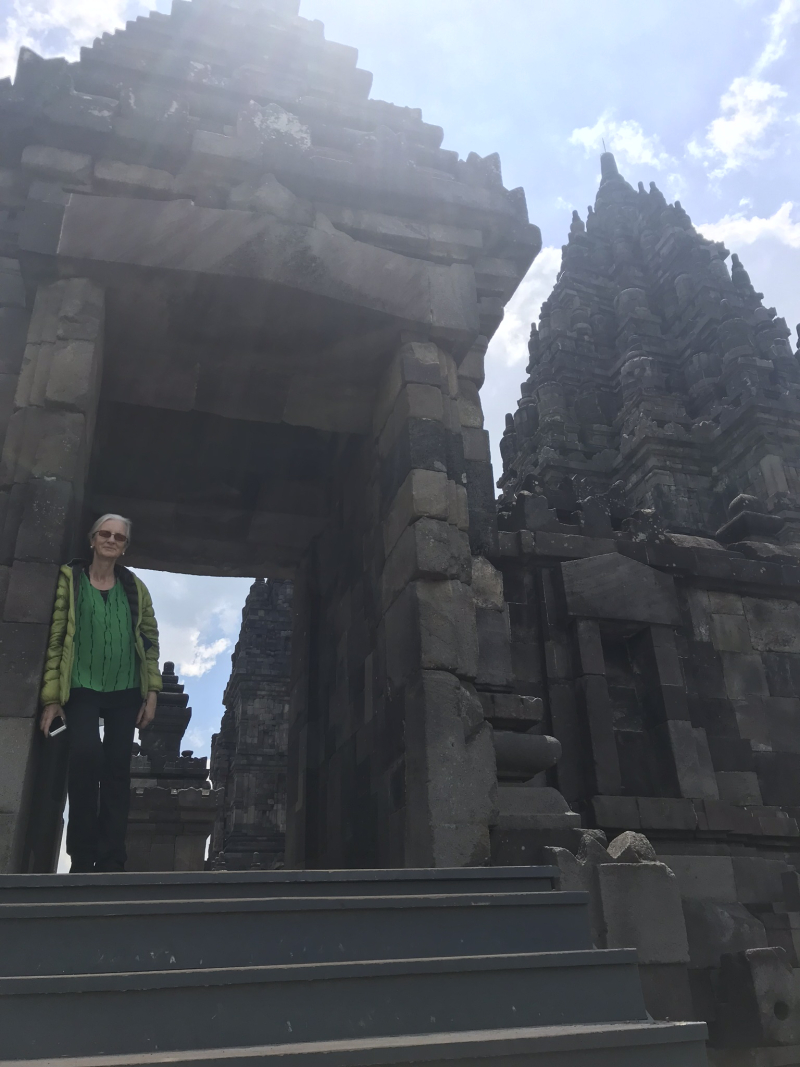 Pictures from our afternoon at the temple.

The rest of that day, we spent time exploring the city and finding hidden treasures in nearly every street. In one, we found a Buddhist Monastery that looked like something out of  a fairy tale. That was a very enjoyable aspect to this city - we found something new around each corner. 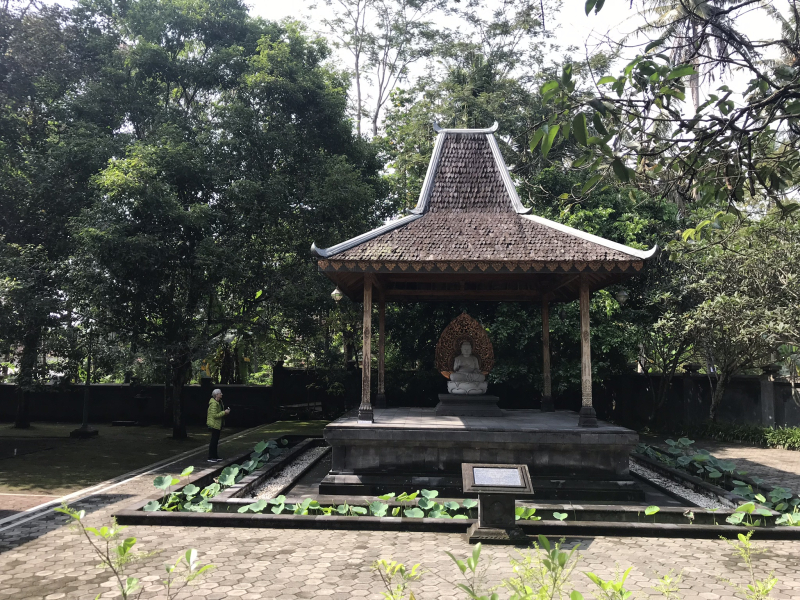 Out of all of the cities we had visited, this appeared to have the least number of tourists, and I quite liked that. In most places, my mom and I were the only Westerners and that made for an interesting experience.

For the next two days, my mom and I did not leave our hotel. We were in a beautiful rural location and feeling exhausted from being on the go. We slept a lot, ate to our heart's content, and felt rejuvenated.

Our hotel was surrounding by two mosques. Indonesia is largely Muslim, but parts of it like Bali are mostly Hindu. While I could not see the mosques, I could hear them. Five times a day, we would hear the traditional Muslim call to prayer.  One of the callers had a particularly mesmerizing voice. While I had no idea what they were saying, the songs were beautiful. Each day, my mom and I would go outside to listen to them.

I enjoy hearing about all religions and customs, and feel amazed by it more when I feel I can be a part of it.

One afternoon while driving through the countryside, we saw many stunning rice fields. I asked our driver to pull over, so I could take a closer look at them. On the outside everything looks green, but when I opened a pod I could see the white rice grain inside. From what I could see, it takes a lot of extremely hard work to harvest rice. 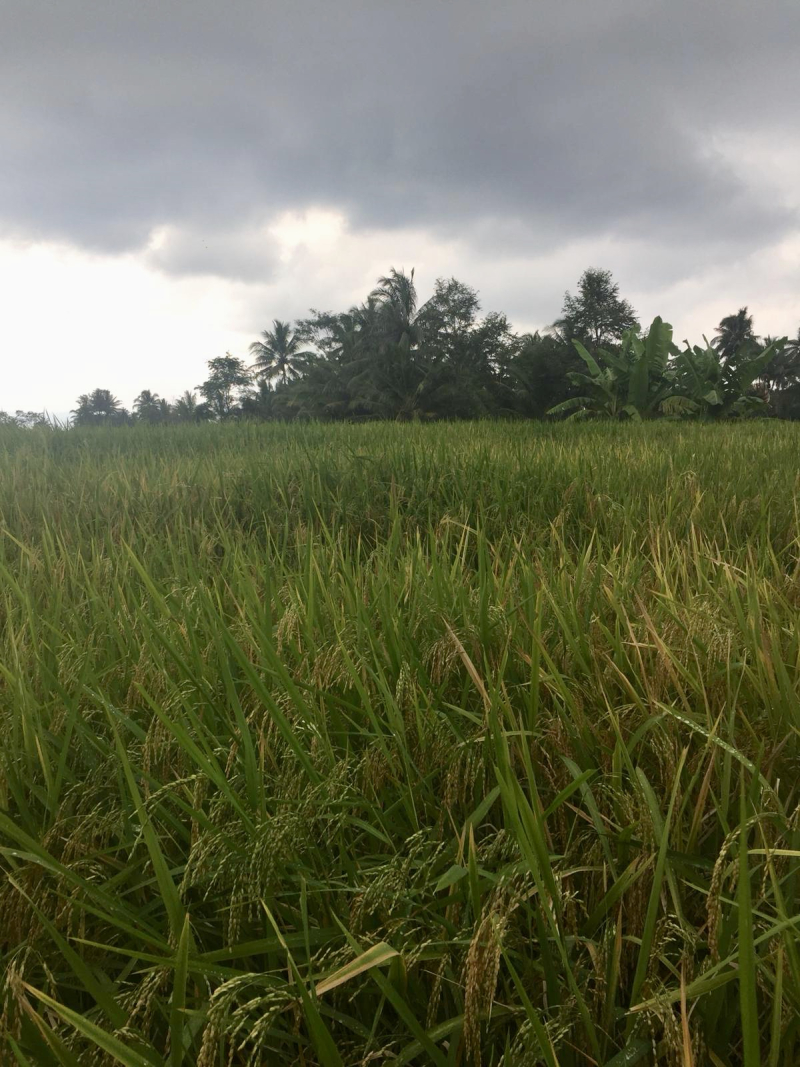 On our last day in Yogyakarta, my mom and I decided to go to the downtown area. We met a local street art vendor who took us to his shop, where he had hundreds of stunning paintings made by local university art students.

I was drawn to a painting which depicted a woman holding a cigarette, possibly working in a field, with a “I don’t give a damn attitude.” While I am not a fan of smoking, something about her resonated deeply with me.

The shop owner told me that the student who painted this wanted to depict the “first Indonesian woman smoker.” He explained that it used to be illegal for Indonesian women to smoke, even if they were working in the fields or doing the same work as men. This woman, however, did not seem to care  - which I admired.

After I paid for the painting, the shop owner saw my name, and he said “oh, Rita! That is an Indonesian name. Here, it means ‘a wise woman.’”

So, my painting, by coincidence, has been given a moniker, Wise Woman.

Below is a picture of the Wise Woman. 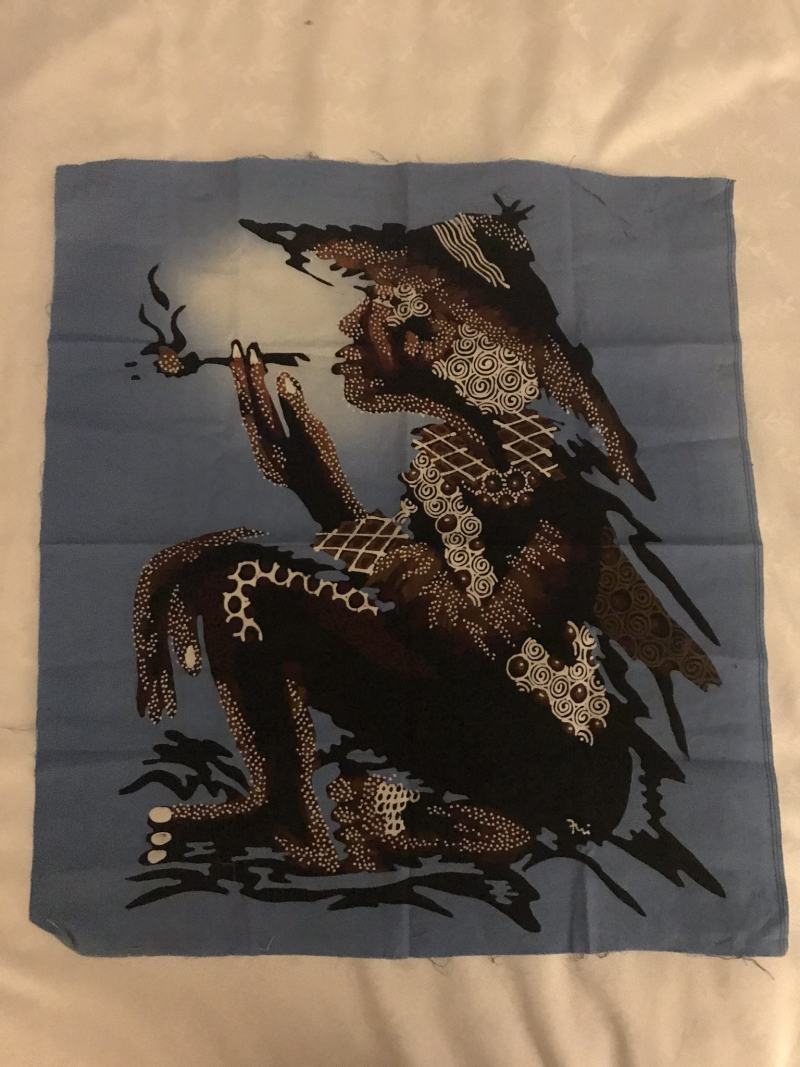 We headed to the Royal Sultan Palace next. While Indonesia itself does not have a King, Yogyakarta does.

At the palace, three teenage girls approached me and asked if they could interview me for their school project. They explained they were asked to interview foreigners, so they could practice their English and see if they could attract more tourists to the area.

These girls were respectful, kind and friendly. The English they spoke was great, once they got over their initial nervousness. While it was meant as a learning experience for them, it ended up being one for me as well. I had the opportunity to learn about their schooling and traditions, as well.

All through Yogyakarta, you see large groups of children in school uniforms. I enjoyed seeing this, and learned that this area has the highest education rate in all of Indonesia!

Also, while at the palace, we had a group of around 30 children run towards us. At first I was caught off guard, but then I realized that they just wanted to interact with Westerners.  One little girl came up and asked shyly if it was okay for them to talk and interact with us. Even at their young age they were respectful. My mom and I were completely open to it!

Many of them wanted to take selifies with us. We were treated like movie stars and enjoyed a good laugh with them. 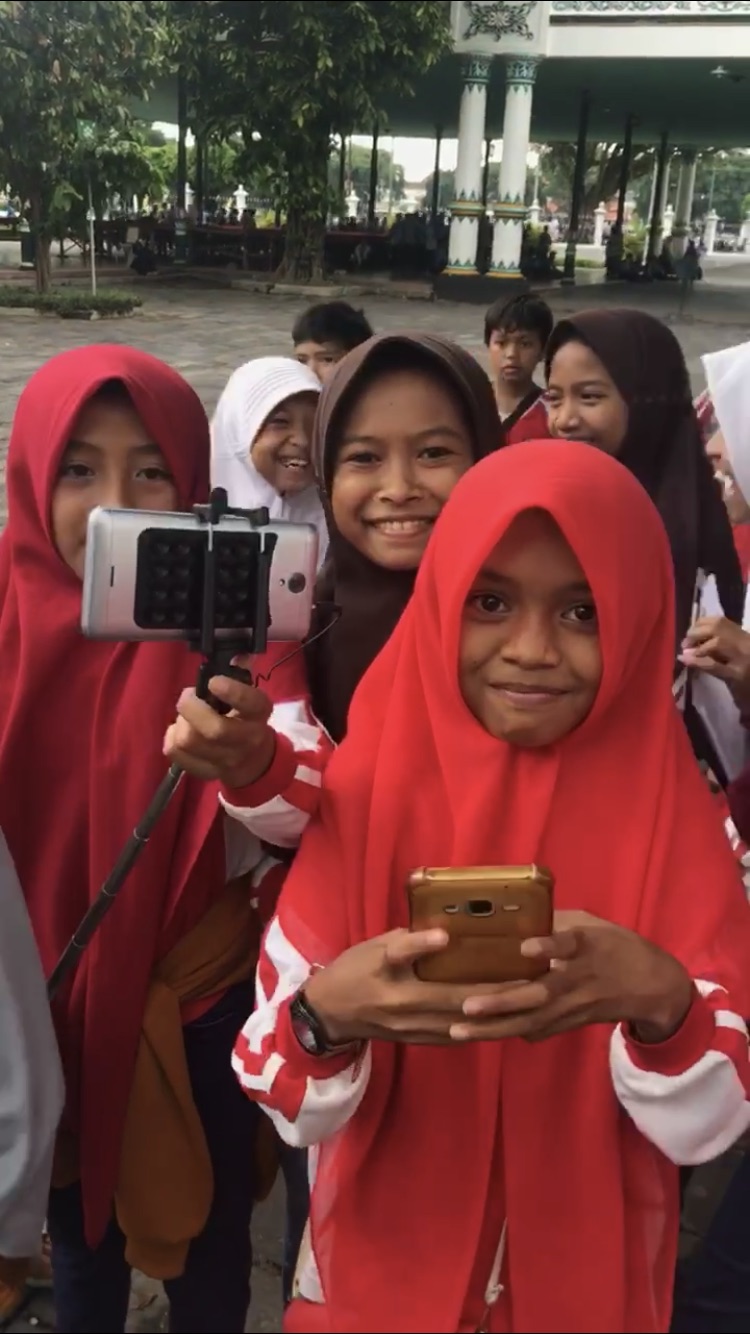 This is what I love about travel, it is usually the unexpected moments that we remember the most. I don’t even know the names of these kids, but I will remember this moment for the rest of my life because of the way they made me feel, and how much they made me smile.

This is one of the first cities that I have been to that was not full of tourists, and this offered a very different cultural exchange. I loved Yogyakarta and I would recommend it to anyone interested in culture and art, or someone looking for something very authentic.