Cambodia - A Country of Compassion

After my time in Northern Thailand, on November 30th, I was headed to Siem Reap, Cambodia. My parents also joined me.

Before arriving in Cambodia, I only knew that it shared a border with Thailand, and it was home to the famous Angkor Wat temple (my original primary motivation for wanting to come here). I was excited to experience a new culture and see one of the world’s largest religious monuments.

Upon landing at Siem Reap airport, I got a tourist visa at customs. While the local currrency is the Cambodian riel, expect to use the USD, and not the local currency when you arrive. 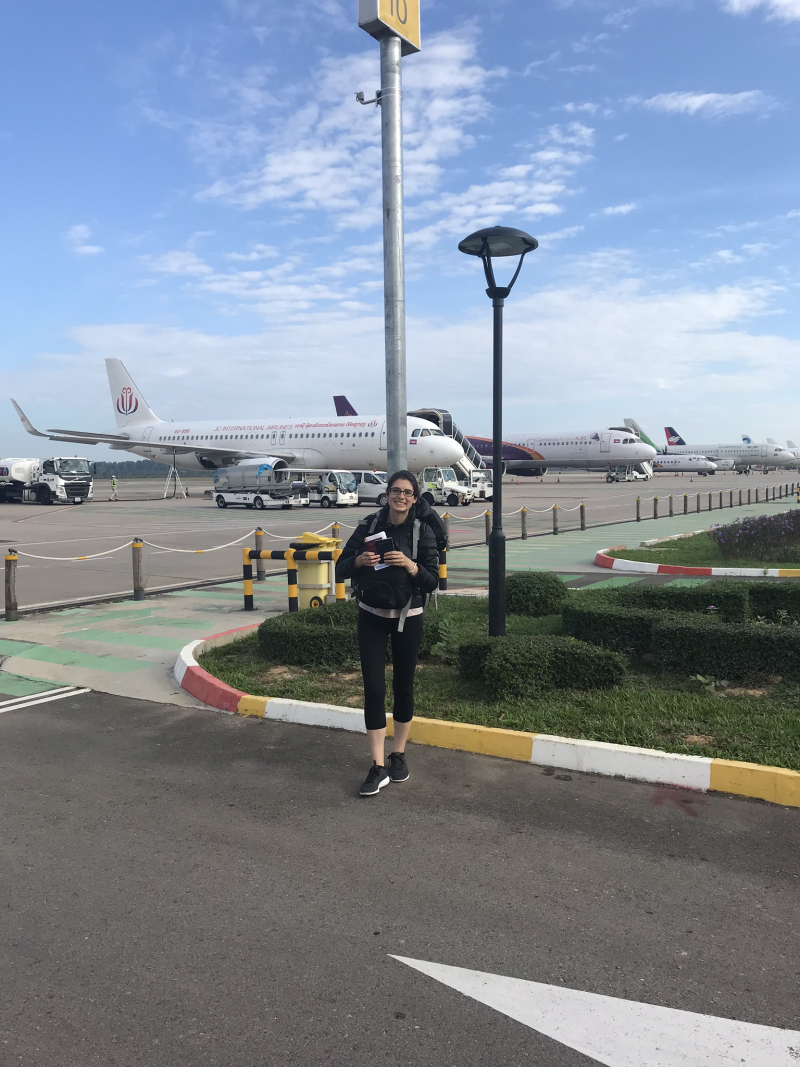 Picture of me immediately after landing in Siem Reap. I was super excited to be here!

As soon as I exited the terminal, I paid $10.00 USD to hire a taxi that would take me to my hotel. In most major airports you see a lot of people, taxis, and commotion, but here, it was almost completely empty.

My driver, Chea, pulled up and we immediately began chatting. His English was excellent, and in a short amount of time, he provided me with lots of information about the sites.  I knew I had found not only my driver, but my perfect guide for Siem Reap!

Chea explained to me that Cambodia from 1975-1979, while under the rule of the Khmer Rouge regime, endured a genocide that ended up killing over 25% of the Cambodian population.

During a 3 day period, the Khmer Rouge also forced over 2 million people to leave the country’s capital, Phnom Penh. This began a massacre of the entire educated population. The regime wanted the country to go back to an agrarian society and saw anyone who was educated (doctors, lawyers, teachers) as a threat. Because of this, most of them were killed along with their families.

Being in Cambodia, while doing my own research, was a truly reflective time for me. I couldn’t believe how little I knew on these events before coming here. I also could not imagine my government trying to wipe out the entire educated class or having around 25% of the people I know die.

Chea (my new Cambodian friend) shared his personal story. His family had to pack up everything they owned and move to a refugee camp when he was young. When I asked him if his family had survived, he revealed that while getting to the refugee camp, his father had died from a landmine injury.

Today, there are still around 4 to 6 million unexploded landmines on the border between Cambodia and Thailand.

When I heard this, I was truly shocked. I also incorrectly assumed that because of the risks of living by unexploded mines, that these would be uninhabited areas. However, after some research, I found the answer is that many people do still live near these mines and farm there. The best answer I could find on this was, “unfortunately, the poor do not have the luxury of being selective on where they can afford to live”.

On my first day in Siem Reap, we went to what is called a “killing field”. These are memorials to remind locals and visitors, about the tragedy that the country suffered,  under the Khmer Rouge. Going to these places is not a fun way to spend a day and it will likely get you upset. However, the biggest message I got from spending time here, is that it is our civic duty as human beings to share these truths and educate ourselves. 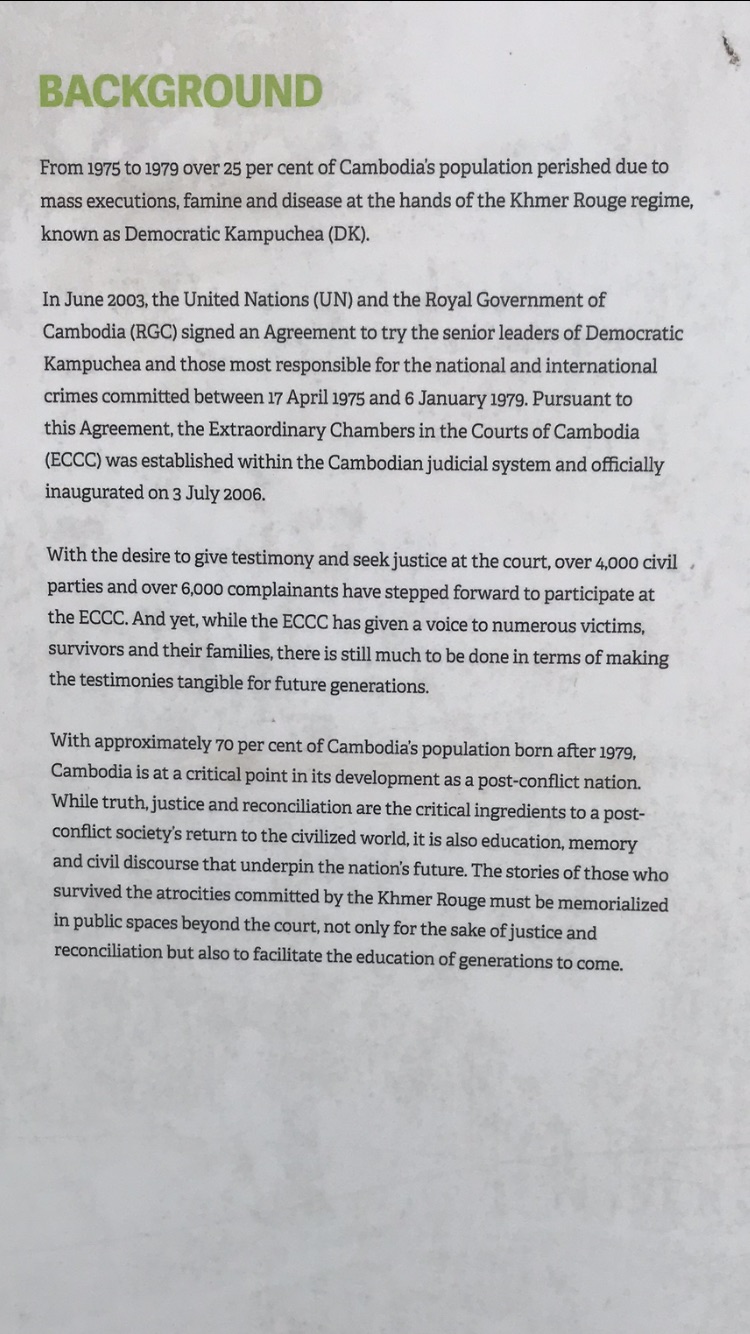 Photo provides information from the Killing Field in Siem Reap.

The heat here was challenging (even coming from Florida) and after some rest, we made our way to the Angkor Wat temple. Upon first glance, the temple was just as magificient as I had hoped it would be! Every inch of it was perfect and there were numerous symbols to be found on almost every inch of the building. 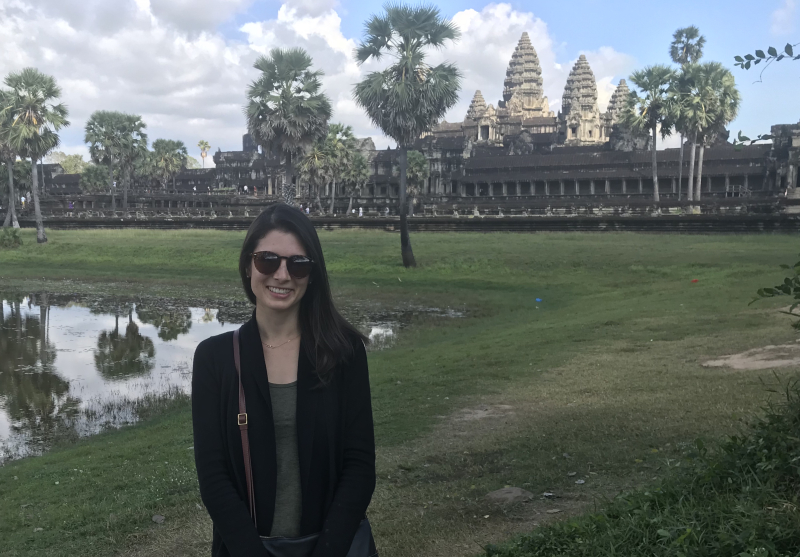 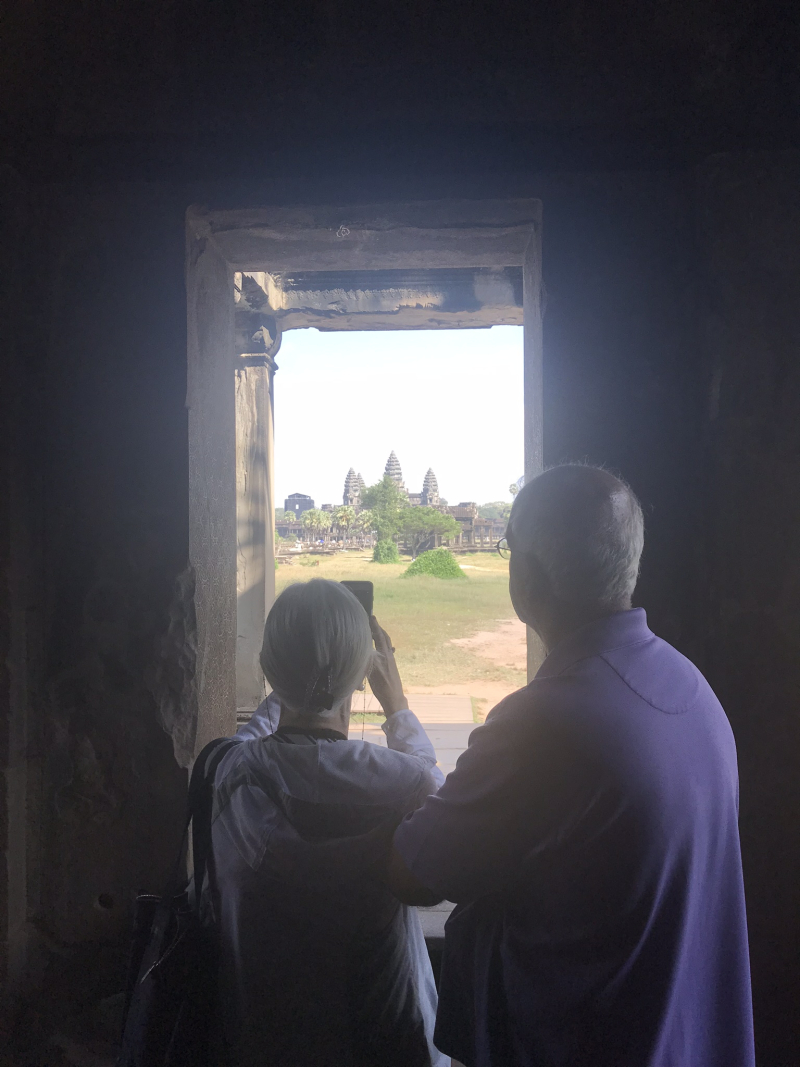 Inside the temple, I noticed a Buddhist monk smiling at me. He had a bowl of red strings in front of him (different than the white I received in Thailand) and began a prayer for me. Somehow, his prayer was different than my previous experience. He was much slower and very passionate. When he finished, I asked him to share the meaning behind the red string, and he explained to me that it was a “daily reminder to be compassionate”.

Yes. What a reminder indeed! 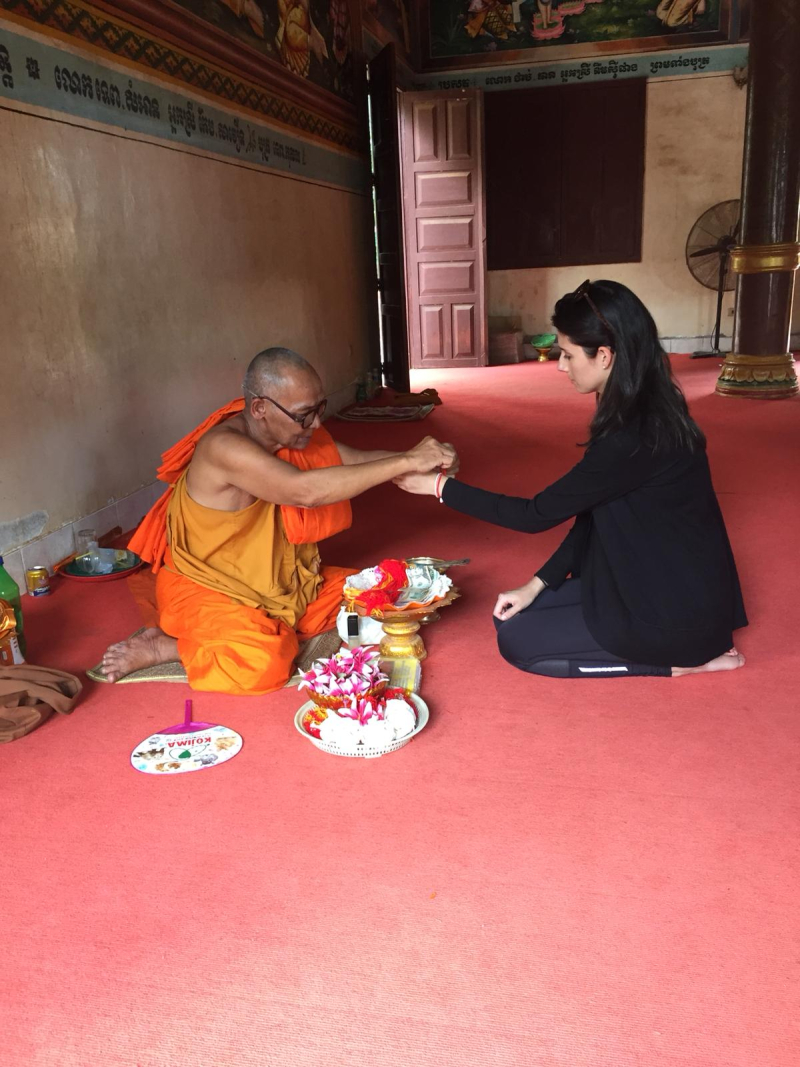 Later that afternoon, we stopped by local street vendors to get some food. I noticed a lot of bugs and fried crickets, which I had seen before on tv travel programs.  When I asked the vendor about them, she explained that bugs were now common street food in Cambodia and had become a big tourist attraction. I asked if this had been a common delicacy for Cambodians, and she said, “no - but unfortunately many had to eat these inspects to avoid starvation in the 1970’s.”

I will be honest when I say the thought of eating a scorpion before did not appeal to me, but after knowing this, I would gladly accept it from any of them.

On our second day in Siem Reap, my parents and I woke up at 4:00 am to see the sunrise at Angkor Wat. This is known as one of the best times to see the temple and it did not disappoint. In fact, we loved it so much, that my mom and I came back the next day to view it from another angle! 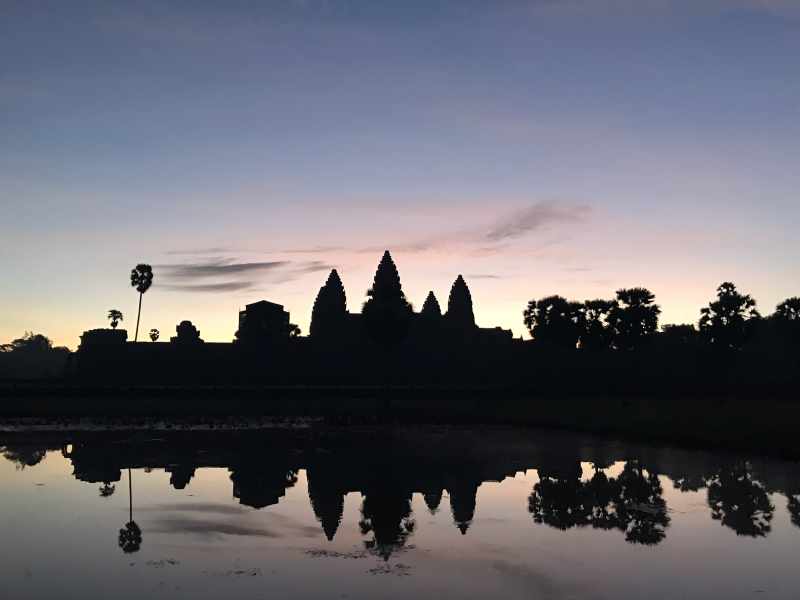 After the sunrise, we took a tour with Chea that brought us to more local ruins, including the Bayon Temple. The Bayon temple is a site that should not be missed if you are in Cambodia!

When we finished that day, my mom and I told Chea that we wanted to see his favorite site in Cambodia. He responded by suggesting we take a day trip to Koh Ker, which was about two hours from Siem Reap.

I learned the biggest lesson here - always ask a local where their favorite places are. Below are some pictures from our trip to Koh Ker, and the temples we stopped at during the way. I have also included a picture of the sign showing these areas had been confirmed landmine free, while many areas have not yet been cleared. 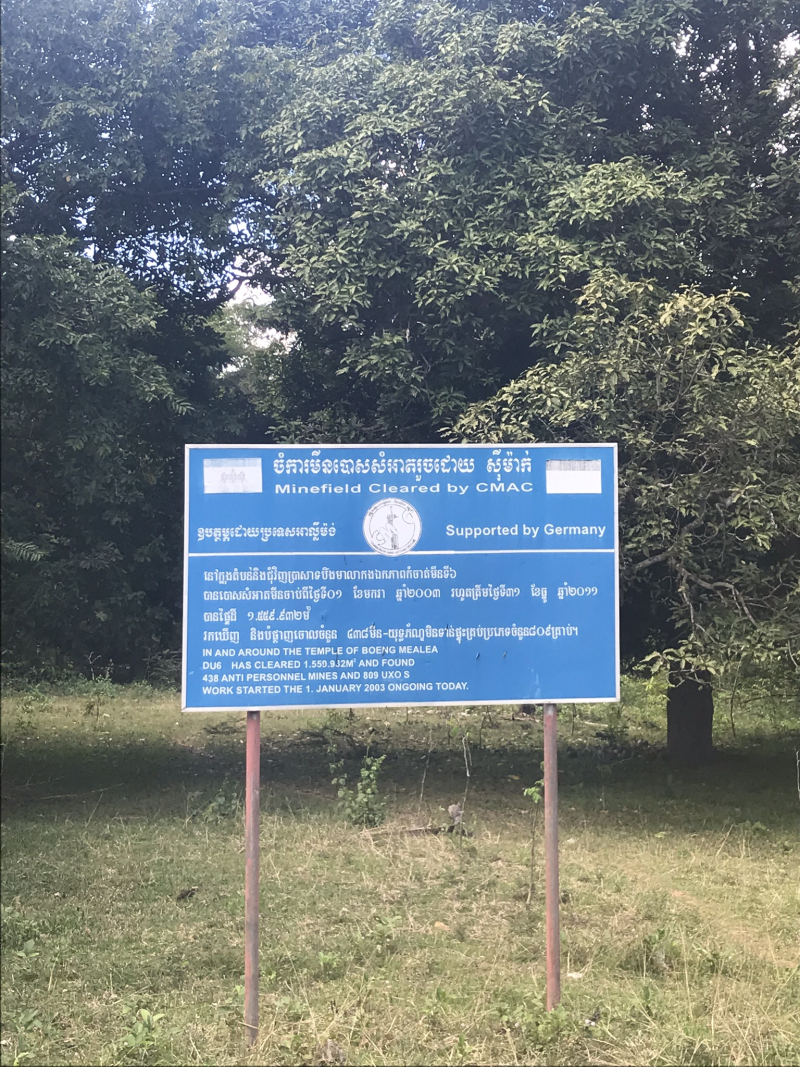 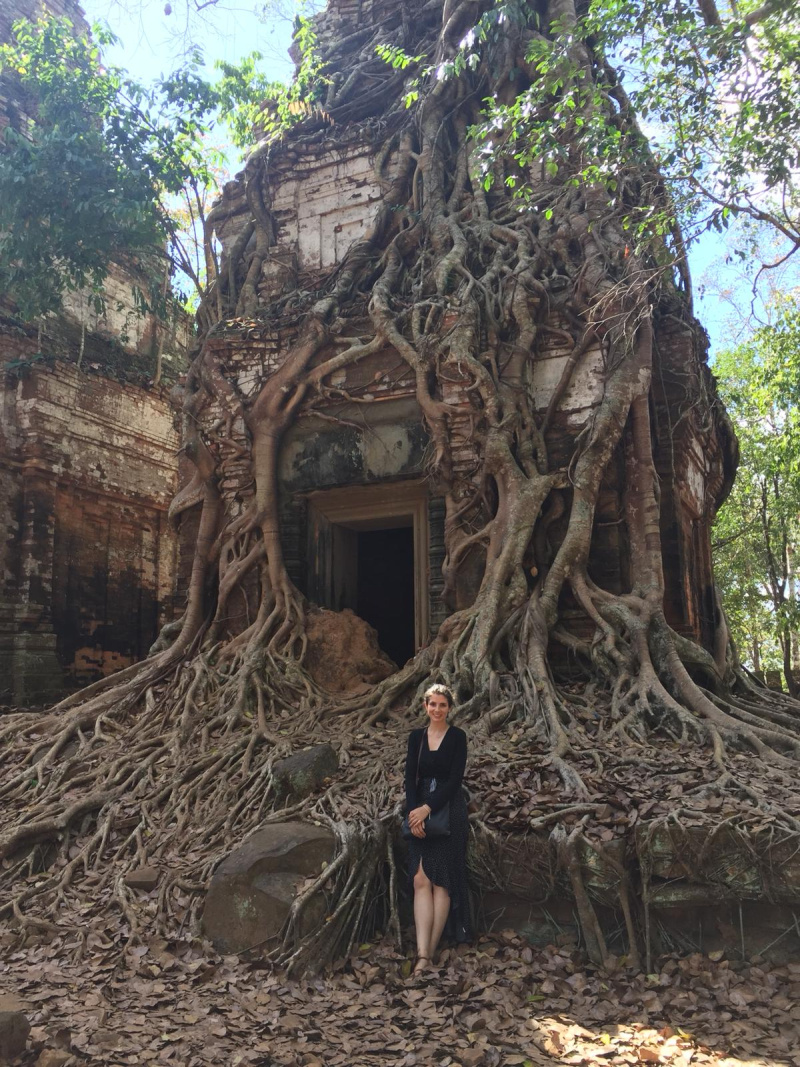 During this tour, I really felt like I was on the set of a Lara Croft or Indiana Jones movie. The best part about all of this, was that in two of the temples, we were the only people there! I have never been to something so incredible and yet had the time to experience it so intimately. Local guides truly know best and when you have someone like Chea, you will not be misled!

Originally in Cambodia, I planned to spend my six days in Siem Reap. However, after learning about the history of the country, I decided that I wanted to visit the Capital, Phnom Penh.

So, on our final morning in Siem Reap, we said good-bye to my dad, who was headed back to the United States.

I then asked Chea to take me to the Angkor Hospital for Children to donate blood. This hospital is run by Swiss doctors and provides 100% free healthcare for children in Cambodia. Most, if not all, could not afford this care on their own.

I learned that one in fifteen children in Cambodia die before the age of 5, and most of the time it is easily preventable or from treatable causes. They often rely on blood donations from visitors, and while the city receives over 2.5 million visitors a year, only a fraction of the tourists know of this need.

I was extremely disappointed when I got tested, but was told I was ineligible to donate because my blood count was too low for that day. I am sharing this information though, because if you are ever in Siem Reap, this is a great organization (extremely clean, too) and an amazing way to give back, that does not involve donating money. For further information, the link to the website is: http://angkorhospital.org

Before my flight to Phnom Penh, I woke up and discovered that I could not hear in my right ear. I had experienced an ear infection in my left ear a few months before, so I knew this was likely the cause. I decided to take a chance, taking the flight with this ear pressure  (it was only a 40 minute flight) and it luckily went well! However, this again had me thinking about the healthcare available in Cambodia.

Once we landed in Phnom Penh, I went to a French doctor who treats foreigners. I only paid $45.00 for my visit and ear drops. I was relieved when I got this, but also felt somewhat guilty as many people in Cambodia live on less than $5.00 a day, and don’t have my healthcare choices.  Another reminder and learning experience.

During our time in Phnom Penh, we visited the main Killing Fields and the infamous S-21, Tuol Sleng Genocide Museum. This was again a tough experience, and where we learned that the slogan of the Khmer Rouge was “it is better to kill an innocent by mistake, than spare the enemy by mistake.”

I am humbled to have had the chance to visit all of these places and to pay tribute to those who lost their lives.

Later that day, we went and saw the King of Cambodia’s palace grounds. These were beautiful and I found them to be very calming. At the palace, we took a tour, and while I discovered that the country is listed as having a Constitutional Monarchy, the real power of the government all lies with the Prime Minster,  Hun Sen.

Hun Sen has been in power since 1985 and is an ex-Khmer Rouge solider (the same group I have been referring to this entire time...). 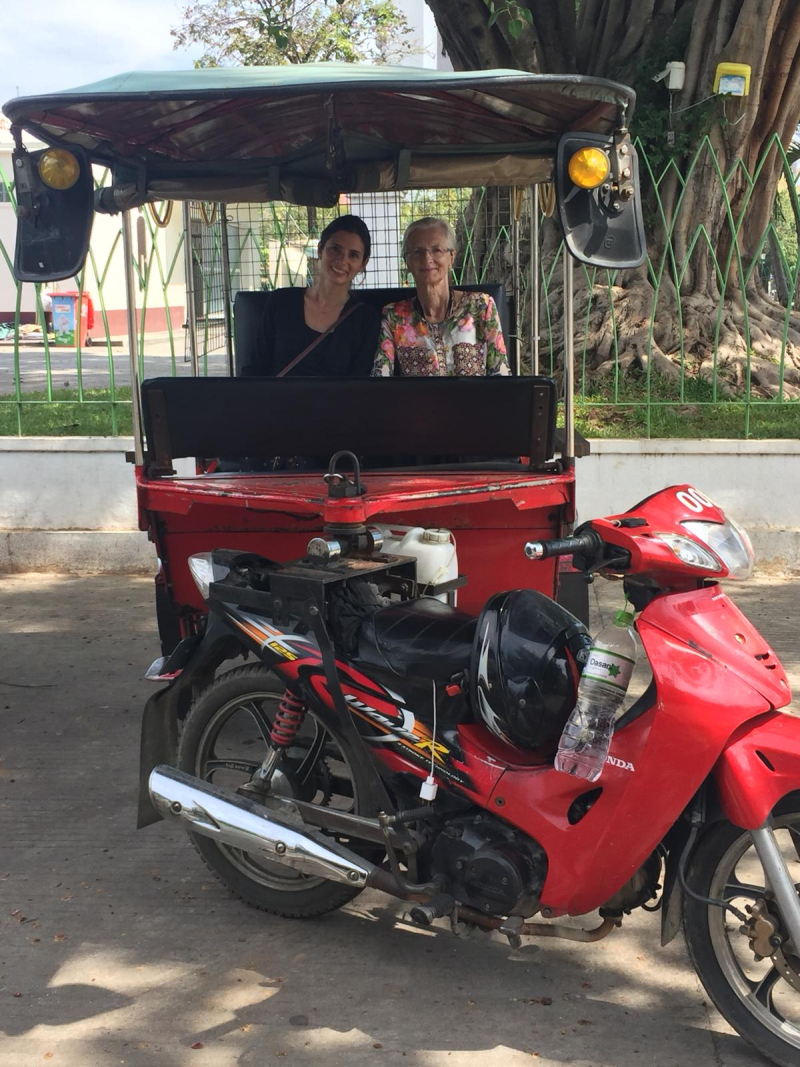 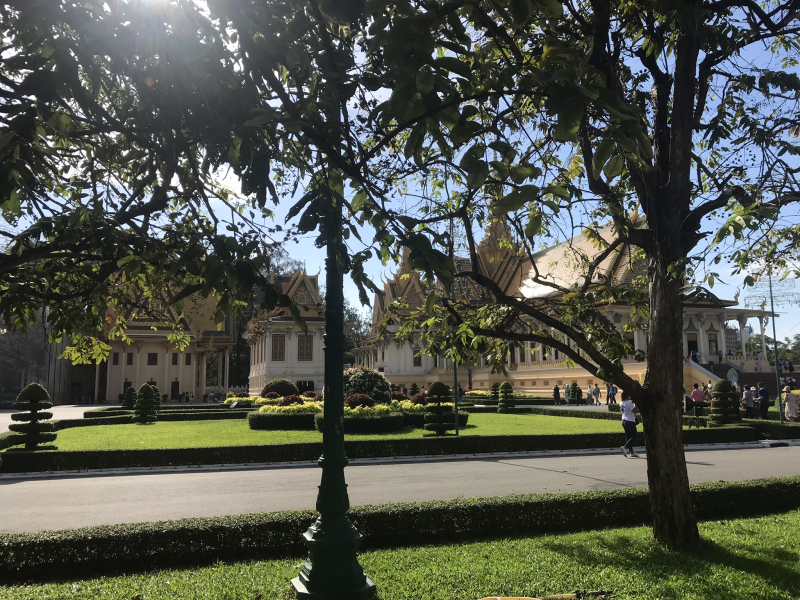 The poverty and the lack of education for much of the population is disappointing. With the high cost of food, accommodation, taxes for tourists, and the widespread use of the American Dollar, I was shocked by how little seems to be given back to the general population. This is a country where the rich keep their wealth and the poor appear to have very few opportunities to get out of poverty.

In Cambodia, as I mentioned before, almost the entire educated class was exterminated in the 1970’s and the country is still recovering. However, there is so much hope. Doctors from abroad work in the country to help train local doctors to international standards. Along with this, international organizations provide free aid to people who have lost limbs from exploding mines, and there is free healthcare to children in desperate need.

If you have a desire to help Cambodia, the best way I can think of doing this is through education. With education and knowledge, everything improves (in my opinion). One great organization that allows for anyone to donate an English education to a student (whether you know them or not) is www.acecambodia.org. If a child learns English here, it gives them a lot more job opportunities in the future, especially in tourism (a huge industry here).

I learned so much during my short time in Cambodia. The people I met here were genuine and kind, and the relationships I have made have truly impacted me.

My time here was an enlightening experience that has left an immeasurable footprint on my heart.

What an amazing experience! I love how much you shared about Cambodia’a history. Chea’s story is so interesting too, it’s amazing that he was so open about sharing.

I also loved the photo of you with the monk - what an amazing experience!!