The fact that I started my trip in a city called Seoul (pronounced like “soul”), is not lost on me. However, I promise, fate led me here. Or so I like to think. This post will cover the four days that I spent in Seoul, South Korea.

When I went online to book my ticket to Bangkok, I decided that I would pick the flight that was the cheapest, and if possible, allow me to do an extended layover for a few days in a new city. The first option was a flight with a layover in Shanghai, and the second option was in Seoul. There was a difference in the number of points needed, so while I would have been open to Shanghai, the lesser points allowed me to visit Seoul, and this was enough for me to know where to begin my travels.

A few facts about Seoul to give you a brief overview of this city:

After a 14.5 hour flight from Atlanta, I landed in Seoul at 5:45am. My first impression after getting off the plane was the efficiency. There were no lines, directions were listed everywhere, and the signage was flawless. I do not think I have been to another airport that was this easy. Within 15 minutes, I had cleared customs and was on the bus that would take me to my hotel (I opted to stay in a hotel the first two nights instead of hostels because I knew I would need to sleep and recover more than usual).

My hotel was located in Yeongdeungpo-gu District. In English, this translates to “divine ascent.” Once I settled in, I made my way to the subway station. If you know me, you know that directions are my nemesis. However, I was determined - I WILL get to where I am going. The first few attempts were rough - thankfully a nice Korean girl about my age pulled out her phone and called her British friend to help me with directions. After this, I was off, and I did not need to ask for help again!

If you find yourself in Seoul, I highly recommend downloading the Subway Application (seen below). It allows you input where you are going and then it estimates the time and the fare that it will take to get you there.

On my first afternoon in Seoul, I spent most of my time at the Gyeongbokgung Palace. In English, this translates to “the Palace Greatly Blessed by Heaven.”  It is hard not to be impressed by the beauty and vast size of this palace. There is a large garden area located in the back, and I could have easily lost myself there for hours (remember directions are a challenge for me!).  I found it particularly interesting that the palace, while located in the middle of a major city, was quiet and peaceful. 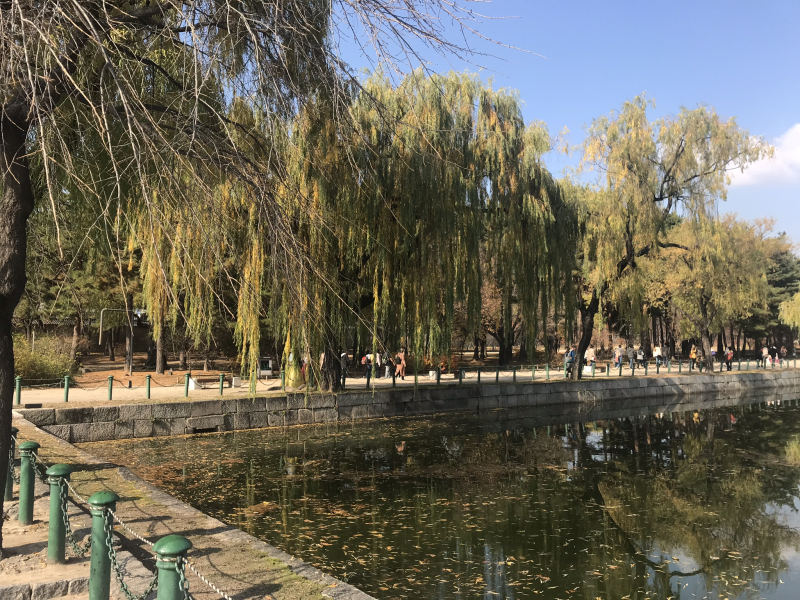 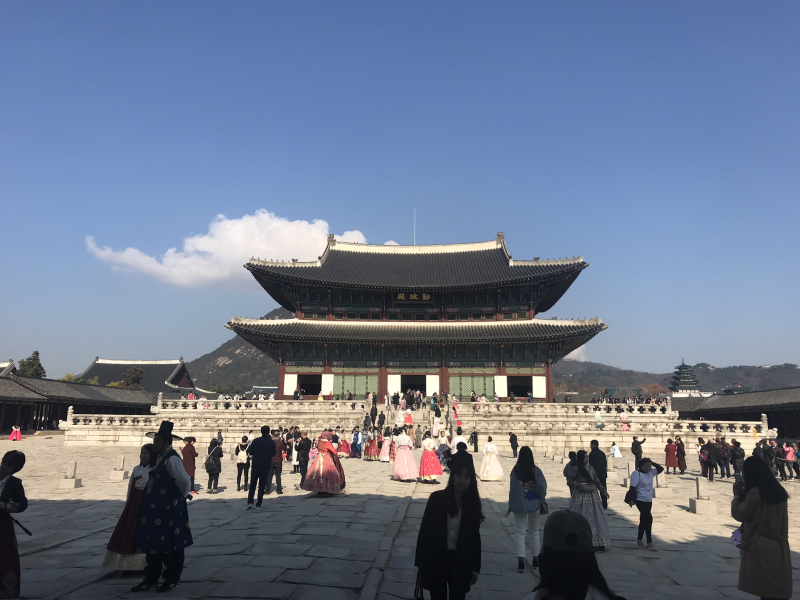 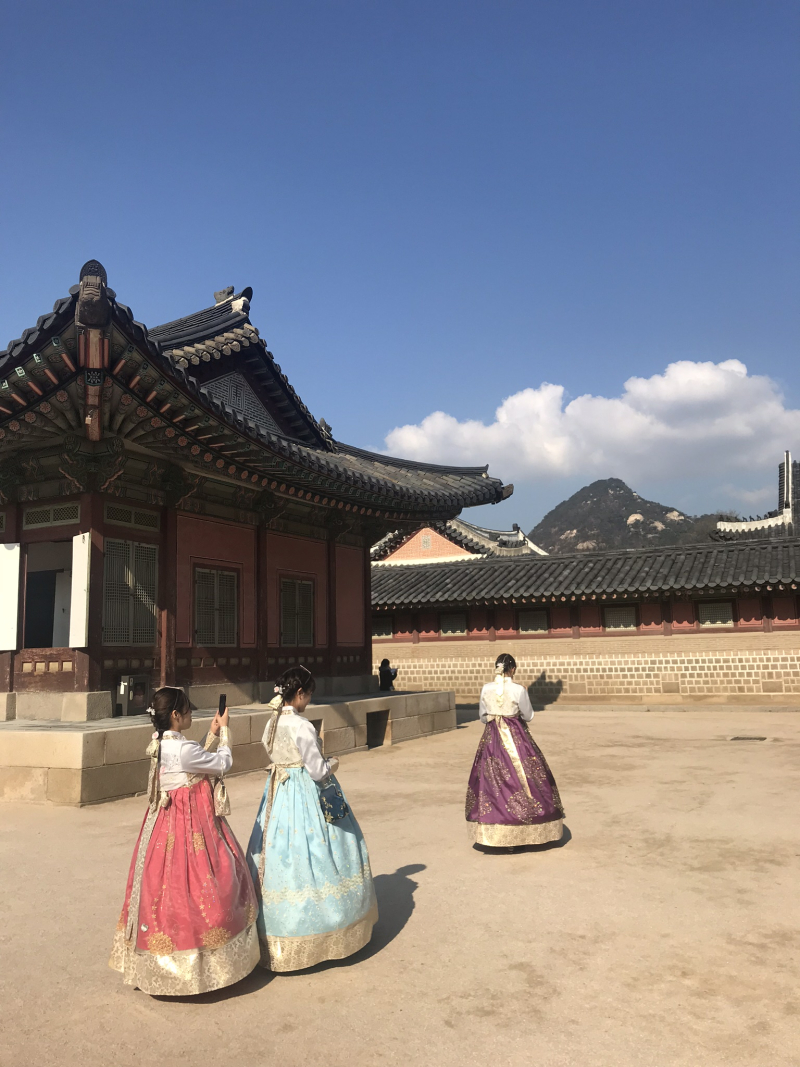 The ladies are wearing the traditional Korean clothing of the Hanbok. South Korean traditions and customs can be found in multiple ways throughout the palace.

At night, I meet up with my friend, Ellen, who is pictured below with her puppy Macho. Ellen, who is originally from Busan (the second largest city in South Korea) now lives and works in Seoul. She and I had originally met when she was interning at the Don Cesar Hotel in Florida, where I worked as a Sales Assistant.  She brought me to Han River Park at Yeoudio. It was quite cold (around 32 degrees) and she showed me the glory of Korean pre-packaged ramen (it cost 3,000 won which equals approximately $2.66). This tasted nothing like the packaged ramen I had eaten in the United States which is rather mild. This was extremely spicy, but addictive, in a way that makes you not want to stop eating, even when your lips have become bright red and hurt. 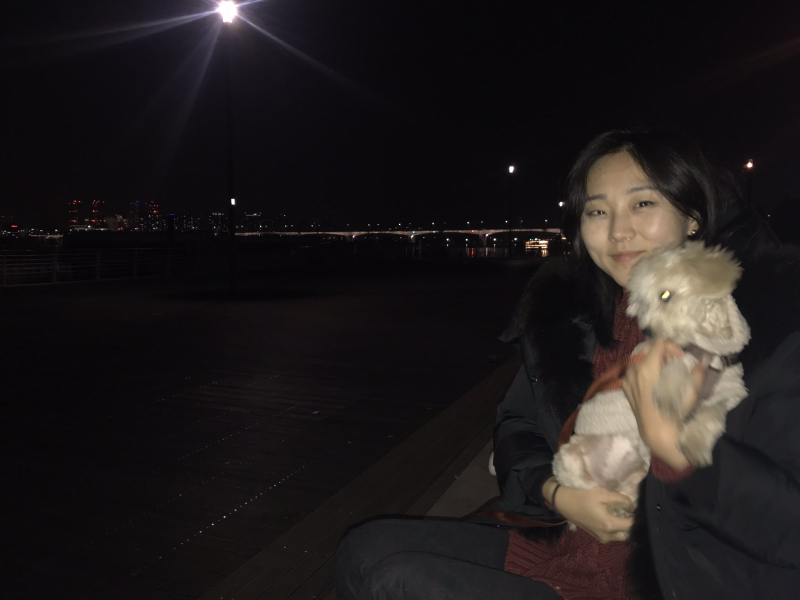 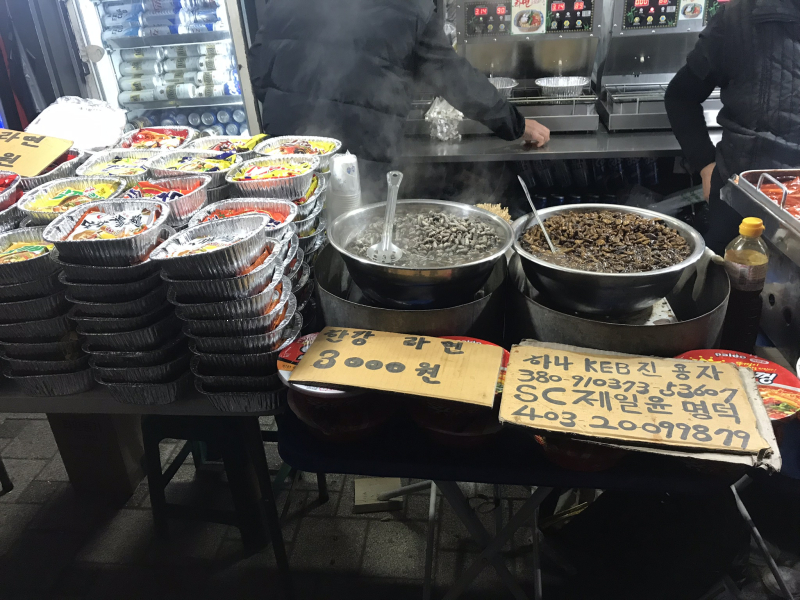 On my second day, I opted to go to an area that was not as touristy, but would give me a sense of the natural beauty to be found in Seoul.

It happened to be a beautiful day and I found myself in Seoul Forest Park.  Heading into winter, in this park, many of the trees were sporting beautiful bright yellow and red leaves. When I travel, nature is a really big part of what I find important. When I begin to feel lonely, or feel something is missing, nature is the biggest remedy for me. 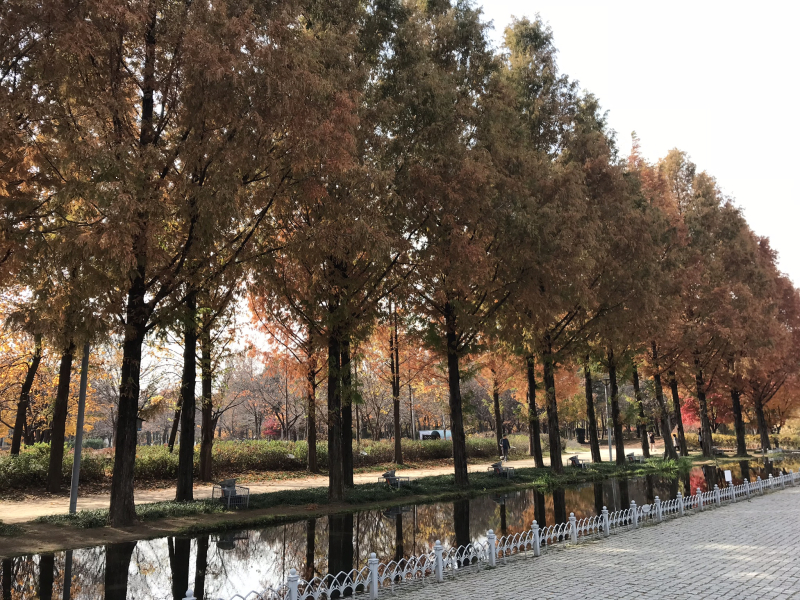 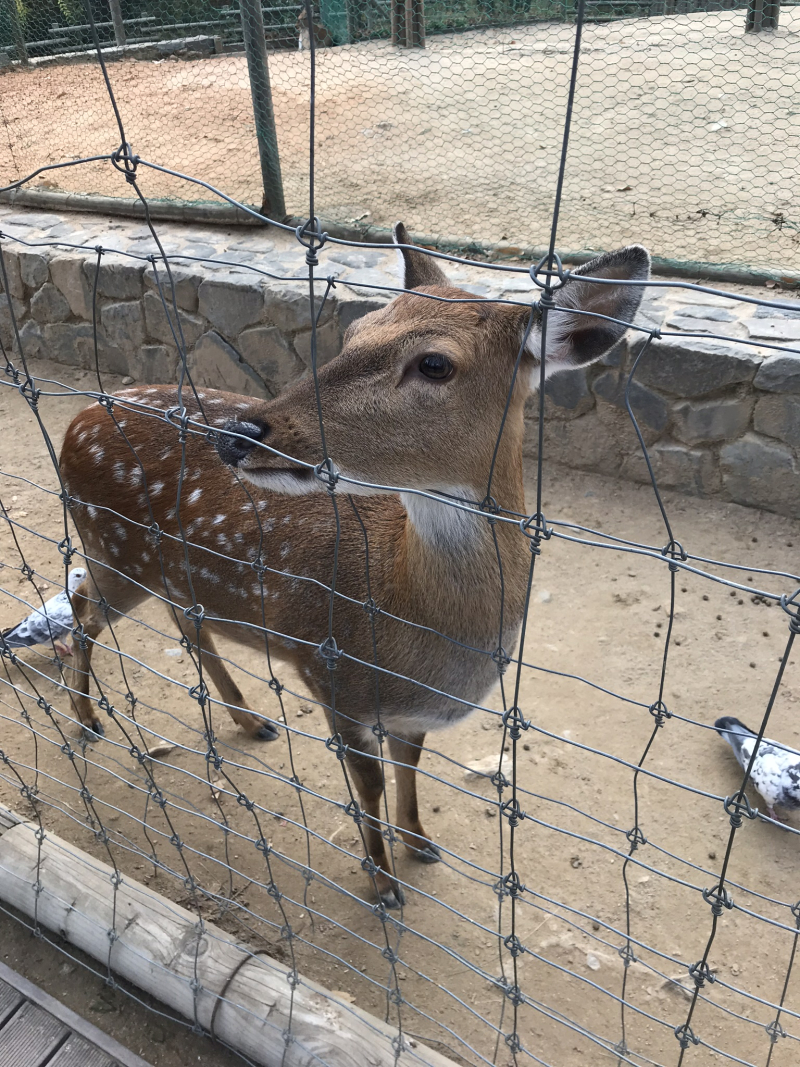 In the afternoon, I made my way to the Lotte World Tower. This is a a relatively new attraction in Seoul, having only opened in 2017. The building is 123 floors, 555 meters (1821 feet) up, and is currently the 5th highest tower in the world! It is easily recognizable as you can see it from most parts of Seoul.

As you ride the elevator to the top of the tower (which by the way only takes a minute), it is incredible to see the technology incorporated into this building. The entire elevator turns into a video-like stimulation that shows you a 360 degree view of Seoul. This is a virtual tour of the city.

At night, the tower also changes colors to signal how good the air quality is for the day. Green means that the quality is good, yellow means that it is moderate, and anything after that is not a good sign and means you should take precautions.

When I was walking around Seoul, it was not uncommon to see many people wearing face masks. These masks are meant to help prevent the pollution in the air from affecting the body. Ellen had explained that if the air pollution was bad, it could affect your breathing, and even make hurt your throat. I truly felt lucky, because this was not something I have to think about when living in Florida. 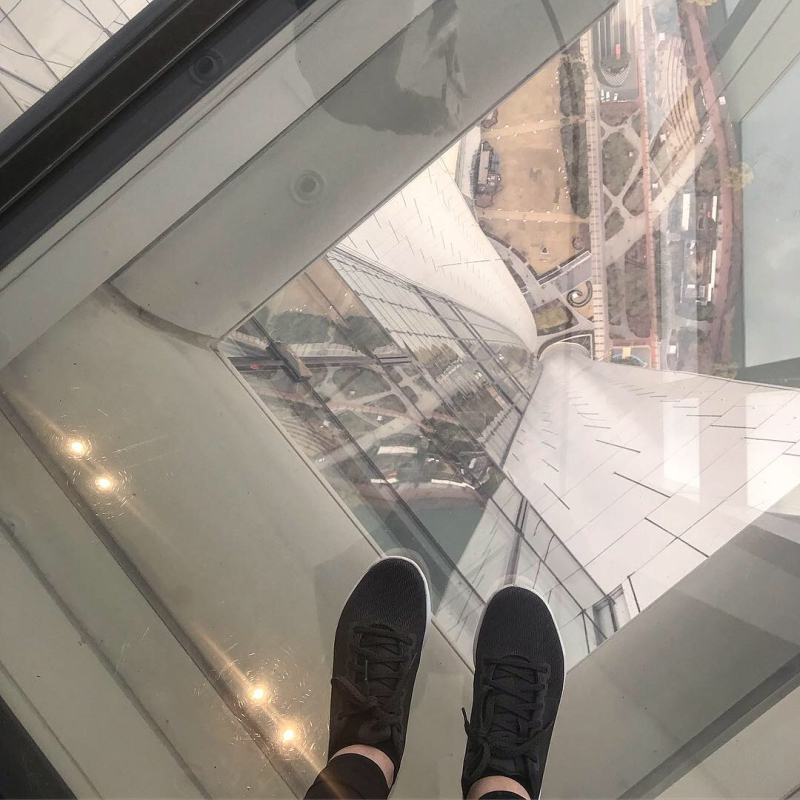 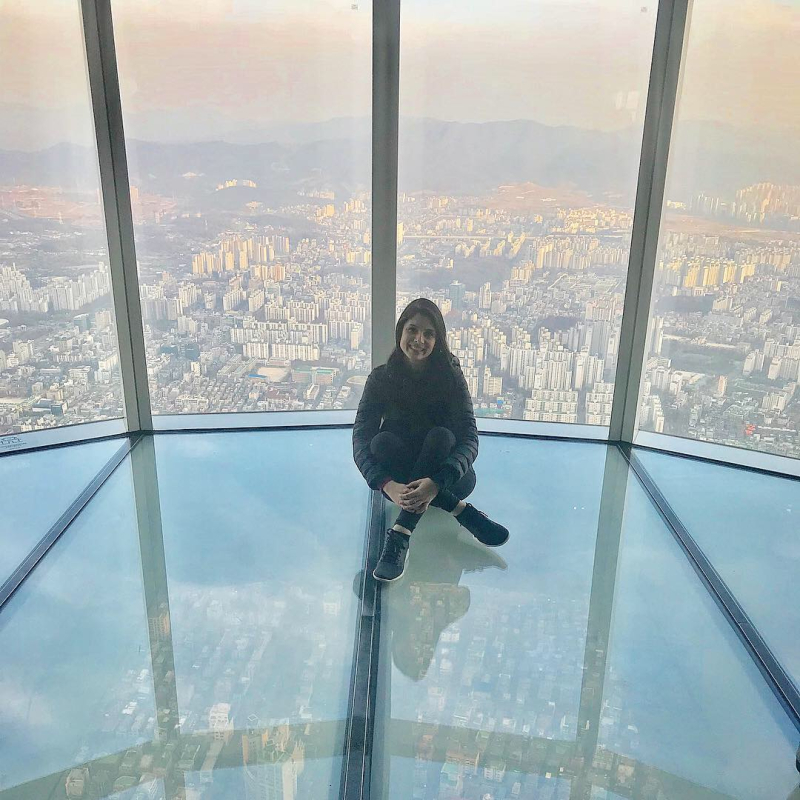 On Friday (my third day), I met up with my friend, Maria, who is teaching English in South Korea.  Maria had originally come to South Korea with the plan of teaching English for just 7 months. She ended up staying longer and is now coming up on her second year of teaching and loving the time she has spent here. I was fortunate to have Maria not only show me around her area, but to provide me with recommendations on things to do and even offer me a place to stay.

In college, we met when I was president of my sorority, and she had just joined as a new member. During those years, I always felt like the older sister. However, this time, I felt like Maria had so much to teach me. I admire her for taking on a great adventure so young. At just 22, she moved away from all she knew, to make a home for herself half way around the world. It made me so happy to see how well she was doing and how she has built a beautiful life for herself in South Korea. 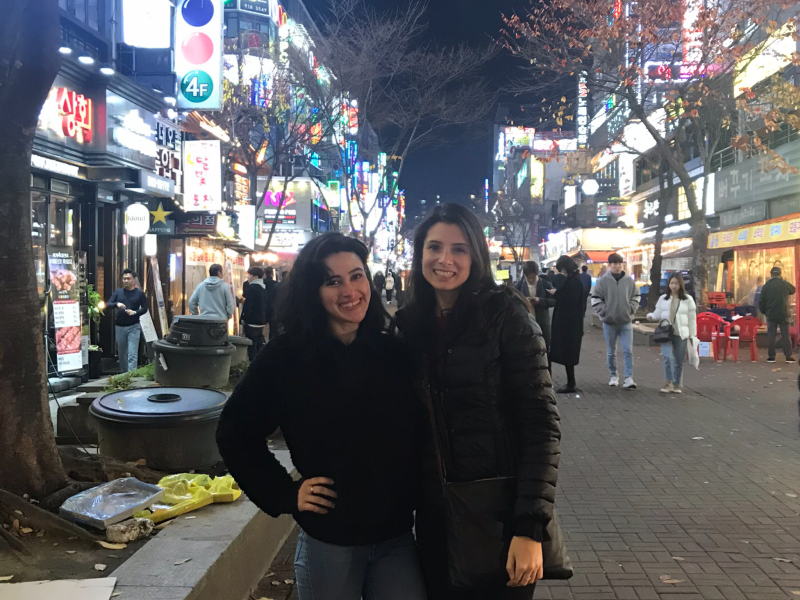 This is Maria and me in Ilsan, the town where she now lives and teaches.

That night, Maria took me out for my first Korean barbecue meal. This generally consists of meat, great sauces, rice and kimchi (fermented, spiced vegetables, a staple in Korean cuisine). We met up with her work colleagues who were also teaching English at the same school. I found it interesting to learn about their different backgrounds and what brought them to South Korea in the first place. Out of the 5 of them, Maria was the only one who had been an education major. The others were taking a year or two to experience living in another country and to figure out what was next on the agenda for their career. I loved getting to meet even more people in a similar age group to myself, who were taking the time to evaluate their next move.

I was also amazed to learn the benefits available to someone teaching English in South Korea. Once you are hired, most schools offer teachers free accommodation (one bedroom studio apartments), healthcare, and vacation time. If you are interested, you can find out more information on teaching here and the process at teachESLkorea.com.

On my last day, I spent time in the lively Hongdae district. The moment I exited the subway station, I thought, “wow, I really am in South Korea.” I couldn’t read any of the signs, the street performers were belting beautiful lyrics that I couldn’t understand, and the food was often left up to my imagination. This area is crowded with both tourists and locals. I really enjoyed the sensory overload that was offered here! 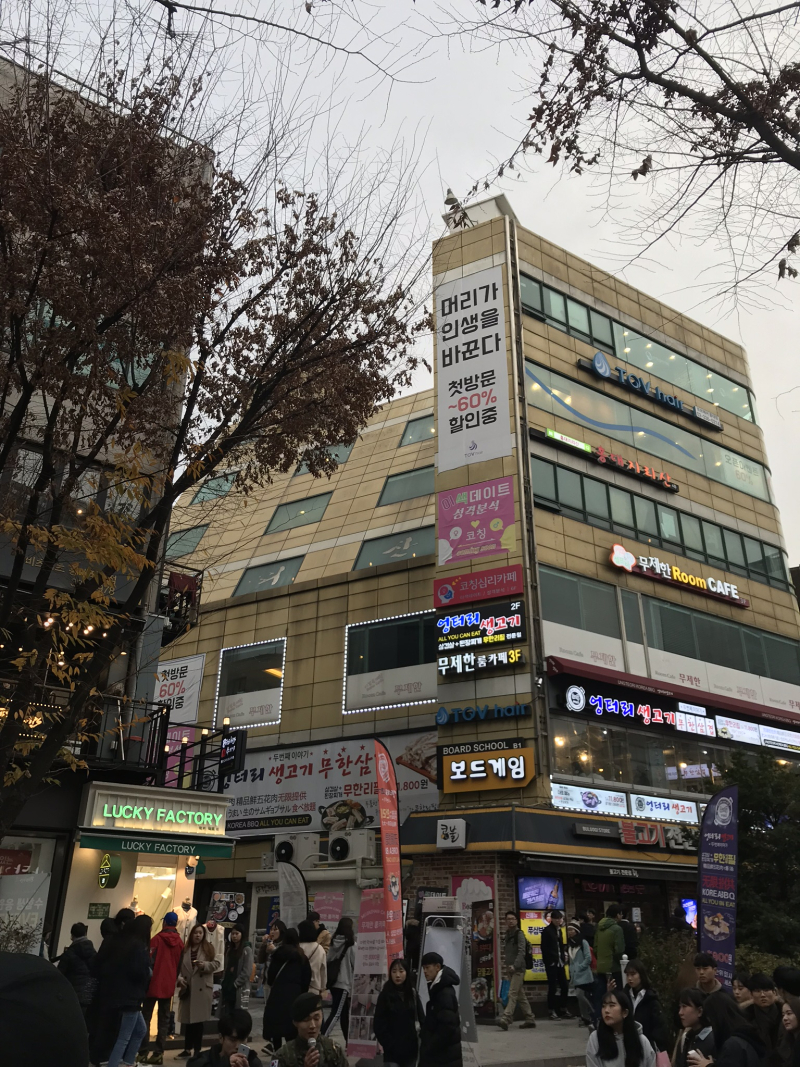 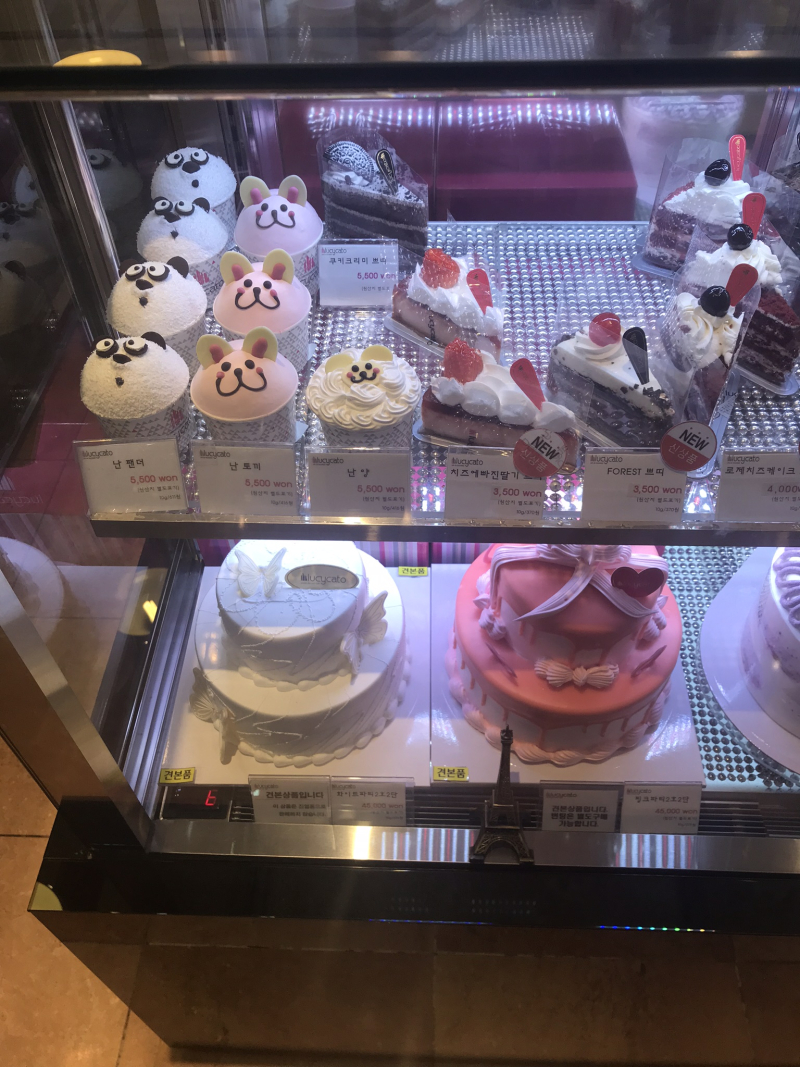 My main observations and notes from my brief time in South Korea are below:

I am so pleased to have had the chance to visit this wonderful city. The people are warm, the city screams innovation, and it offers a place that is a mixture of beautiful nature and hundreds of skyscrapers. I hope to have the chance to come back for more.

I not going to lie, when I first saw your post I had to read it twice to be able to understand the magnitude of your dream adventure! It sounded a bit scary traveling so far by yourself but it didn’t take me by surprise at all this is the Rita that as a baby with a 15 minute nap would have the energy to continue running and playing outside like if she had slept hours and was always on the go!

Reading your first post not only was like being there with you experiencing what you are seeing but I can see you are going to be a great blogger sharing this great adventure. You got me hooked!

Continue having such a great time seeing new places, meeting new friends, and giving us a token of such an experience. Take care and be safe! Love you bunches❤️

You are an amazing writer! I loved everything about this! Keep going, I can’t wait to read more! 💕